Main side effect is hunger 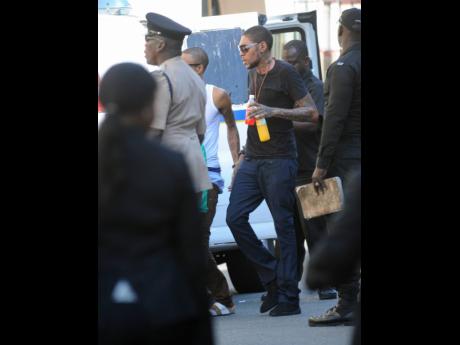 File
Adidja Palmer, more popularly know as Vybz Kartel, is said to be ‘doing well’ after taking the first dose of the AstraZeneca COVID-19 vaccine.

“I saw Mr Palmer on Saturday, and he is doing well. He is taking his Panadol, and even told me that the side effect he is experiencing is mostly hunger,” said Kartel’s attorney-at-law, Isat Buchanan.

Vybz Kartel, who is an inmate at the Horizon Adult Remand Centre, almost never got the opportunity to participate in the vaccine exercises due to issues surrounding the transportation of inmates from the maximum-security facility; however, Buchanan saluted Senator Matthew Samuda, minister without portfolio in the Ministry of National Security, for making it possible.

“I am happy, not just as the dancehall entertainer’s attorney, but to see that the Government and Minister Samuda when the time calls for governance, he stepped up so the vaccine could be administered to the inmates,” said Buchanan.

According to Samuda, more than 200 inmates have received the first dose of the AstraZeneca vaccination at both the Tower Street Adult Correctional and Horizon Adult Remand facilities.

“We have offered vaccinations since late April to our adult population at all seven adult correctional facilities. This is but a continuation of the process for us to work with the Public Health Department to increase the vaccination rates within the inmate population,” he told The Gleaner.

Samuda said, “The important fact is that all inmates have been offered the vaccine, and these vaccine exercises have continued with greater frequency, as vaccine availability has increased.”