DJ Delano turns up the volume on Twitch 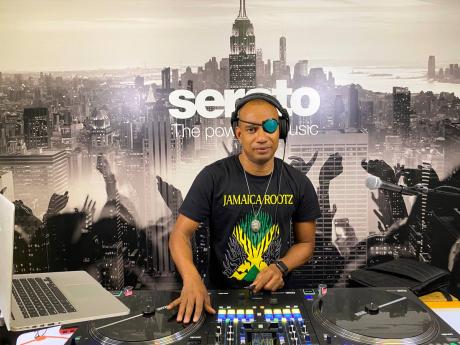 Contributed
DJ Delano plays at a studio in Brooklyn, New York during his Serato performance.

As a music producer and disc jockey, Delano Thomas, best known as DJ Delano, has gone the extra mile to connect with an audience. Online spaces and social media platforms, including Instagram, Facebook, YouTube, Vimeo, Streamlabs, and Twitch (or Twitch.tv), have become more familiar to consumers outside of their usual market. The latter, in particular, has transformed into a playground for disc jockeys and musicians like DJ Delano, who not only has a profile but was also featured on Serato’s Twitch profile.

“It has helped me in many ways by keeping relevant, entertaining my supporters, gaining new supporters, building a community that looks out for me any time I go live, and also still have an income while our entertainment industry was completely locked down and remains in limbo,” DJ Delano told The Gleaner.

He added, “I was so excited and honoured to be invited and to be associated with a globally known company like Serato that produces the number one software used by disc jockeys from all over. They work with major names around the world, and now I’m added to their list, and in addition to that honour, I was proud to represent my Jamaican music culture.”

The Serato performance, which took place on August 19, was recorded at the studio in Brooklyn, New York. Initially a site dominated by video game streamers, the diversity of the content on Twitch evolved during the pandemic when persons from other fields became knowledgeable of its existence and use. It has been dubbed the ‘online equivalent of going out to play at a club’. DJ Delano explained that there is also the probability of earning, as music players take advantage of the platform that allows streaming free of cost without any interruptions. “Well, of course, you have to put in the work to arrive at earning status, but once you reach the affiliate status, you can start earning through people who subscribe to your channel or from commercials that run on your stream, then when you reach partner status, then it’s endless from there,” DJ Delano said. “I don’t think we not making good use of all these resources, even me, I am still researching and learning what’s out there for us. I keep pushing myself and others to have the discipline to keep improving our ability to connect to the world and contribute more to our culture,” he continued.

According to Matt Perry, artist relations manager at Serato Limited, the advent of livestreaming technology has allowed the software company to expand its reach by highlighting disc jockeys worldwide that use Serato DJ. He also shared that with curated reggae-dancehall playlists, they have helped to introduce representatives in the field (including Renaissance Disco) to its partners Beatsource LINK and Beatport LINK to create contemporary and classic playlists for their service, which works with Serato DJ software.

“Delano and Renaissance Disco are very influential with the role they played, blending the hip hop style of DJing and scratching with dancehall riddims and a cappellas. It’s been great seeing his regular show’s streaming on Twitch,” he said.

Perry added, “He has also worked with us on education initiatives with the Jamaican Tourism Linkages Network and the Tourism Enhancement Fund to help provide valuable information and licences to the community of working disc jockeys in Jamaica.”

“We featured a few sound systems from Jamaica, as well as the diaspora in Canada, the US, Japan, Germany, and so on. Through that event, it helped connect us with Delano and Jazzy T of Renaissance Sound. This has been a great opportunity to showcase the legendary sounds of Jamaica spun by one of the premier sound systems and from other countries outside of the offices of Serato, which are based in New Zealand, New York, Los Angeles, and London, UK,” Perry said.