10-y-o Kyrie McAlpin ‘got herself’ into show business

Now she’s building her résumé and learning about her roots 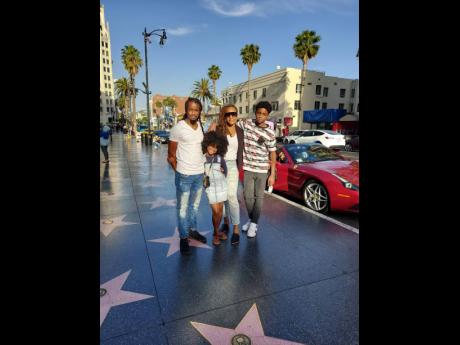 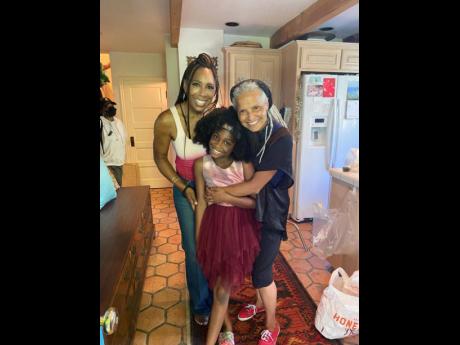 Contributed
Award-winning actresses Dawnn Lewis (left) and Victoria Rowell sandwich Kyrie McAlpin while on set of the ‘Blackjack Christmas’ movie, which is set to be released later this year. 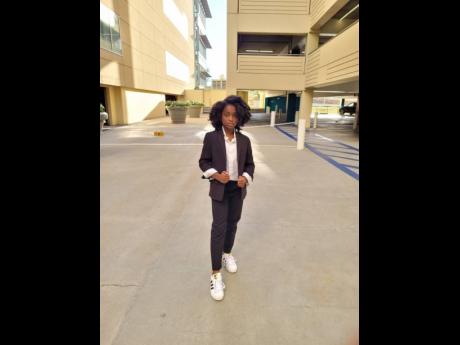 Contributed
At only 10 years old, Kyrie McAlpin, who is the youngest actor featured in the Victoria Rowell-directed ‘Blackjack Christmas’, has played close to 50 roles and doesn’t plan to stop there. 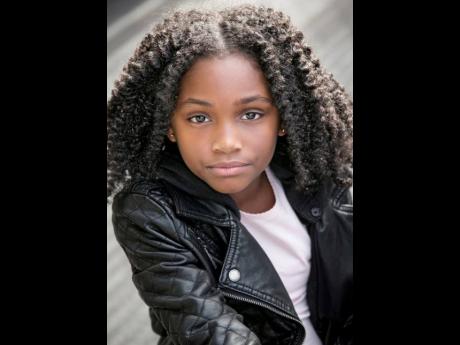 Contributed
Kyrie McAlpin is serious about being an actress and plans to stay in the industry for a long time. 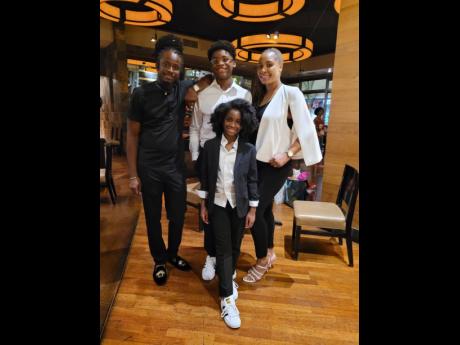 Contributed
The McAlpin family — Dane McAlpin (left), DeLijah McAlpin, Kadene McAlpin (right) and the youngest of the pack Kyrie McAlpin — are fully invested in paving a way in the global film industry.
1
2
3
4
5

Born to a Trinidadian father and a Jamaican mother, 10-year-olf American child star Kyrie McAlpin is being raised on strong, traditional Caribbean values. “Growing up in Jamaica, education was always first priority. My parents didn’t play about school, and I instilled that into Kyrie and DeLijah (her brother), who also acts and is a YouTuber and athlete. There is no joke when it comes on to grades, and in order to take part in anything, they must make good grades. That’s how our parents grew us,” says Kadene McAlpin.

She added: “I teach Kyrie not to let the fame she has get to her head. She still has chores. We make sure she knows how to clean and cook. She is homeschooling, but nothing will stop her from receiving the proper education needed, and she has downtime just like every child her age. I also know how disgraceful it would be to my family if I did any different than what I was taught growing up.”

The mother and wife to Dane McAlpin, the chief executive officer of the monthly Caribbean event Soca Passion in Houston, Texas, who was born in Kingston and migrated to the US at a young age, is a clinical laboratory specialist but proudly wears the title of mom-ager, managing the careers of both children. Kyrie is one of the younger actresses in the Victoria Rowell-directed Blackjack Christmas film, which will be released later this year. She was a preschooler when she started doing star-like things, said Kadene, and by the age of four, was signed to the Neal Hamil Agency.

“Kyrie got herself into the business. She has a gift that cannot be taken away or goes unnoticed, born with this personality and star momentum. She would make her own runway in her room, sing songs and act them out, dress up and loved stealing my make-up and plastering it all over her face. Then she would put on shows for my family to attend in her room,” she said. “Every day she did something just made me realise someone has to see her. Never ignore the signs your children give. Listen to what they want and evaluate your life and how you can make it work for them.”

Kyrie never wants to stop acting, and she does not see herself taking up a career in any other field.

“I plan to continue acting until I am at least 80 years old. It is my whole life, and I love it with my whole heart. The profession has taught me that there will be a hundred nos, but pray, read your Bible, and get motivated, and the yeses will come. You also have to love it,” Kyrie told The Gleaner.

Her résumé has developed over the past six years, taking on roles in the comedy, action and crime TV series L.A.’s Finest, in Netflix shows such as Astronomy Club and Sneakerheads and was one of the leads in the movie Birdie (also directed by Victoria Rowell). Kyrie has been featured in commercials and music videos like Demi Lovato’s Commander and Chief, and she is the voice of the young Michael Burnham in Star Trek: Short Treks. Her latest voiceover project is for the Apple TV+ series Doug Unplugged.

“I think I have had close to 50 roles. Two of my biggest roles thus far would be acting for Aunty Vicky (Victoria Rowell). Each of my roles teaches me something different and have been amazing experiences. The first time I saw myself on television, I got so excited, but I am still my biggest critic,” she said.

Her character in Blackjack Christmas is Marsha Matthews – a young girl about – same age as Kyrie whose favourite holiday is Christmas and is very talented (which her mother said she knew was for her the moment she read the script). Though she was not part of the cast that was shot on set in Jamaica, she shared that she is honoured to be in it because it has significant meaning for her family’s culture.

Kyrie shared, “It is the first Caribbean-themed film I have been [cast] in, and it relates to me in several ways. A lot of things said in the script I can relate to and laugh about. I also learned to play the piano very well in this production. It was a great experience just knowing that it will help me learn about the Jamaican community more. It was on the bucket list to visit Jamaica, but all that was interrupted by the pandemic.”

Out of all the goals she has set for herself, Kyrie wants to book five major movie roles in one year and win the title of Best Actress by age 18. She has already expanded her brand by launching an online lip balm and clothing store called Kayastic by Kyrie.

“I do feel the pressure sometimes, but I’ve learnt to just take a deep breath, and I listen to motivational speeches to find ways to get inspired. I plan my days so that I am not overworked and can still have fun – painting, making slime, and I love movie nights. My happiness is important, too,” Kyrie said.

It is difficult knowing that the pressures of the film industry have seriously impacted many young actors and watching their children go to auditions and keeping a tight schedule, even more for their father Dane McAlpin who says Kyrie is and will always be ‘daddy’s girl’.

However, Dane, who supervised the interview, revealed: “I’m very protective. It’s scary thinking about what we see and hear, but her mom and I are so hands-on. It’s about being able to get her into to the roles, but it’s also who she’s going to work with, and Aunty Vicky is a great role model on and off stage. Not every cast member or director we interact with will be like that. I don’t see her doing anything else, (so) getting the right people in her community right now and being her support system all play a big part. We cannot wait to see the finished film and help her to make her other dreams a reality.”