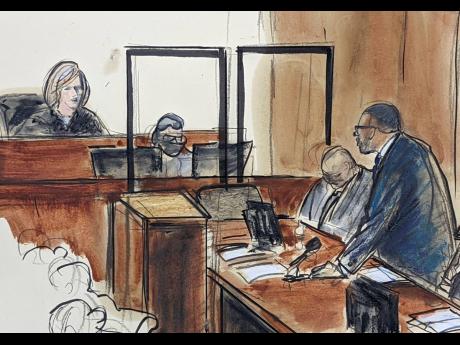 AP
In this illustration drawn from a video feed, R Kelly (right) stands and responds to Judge Ann Donnelly’s question of whether or not he has decided to take the stand in his own defence, on Wednesday, in New York.

With the R Kelly sex-trafficking trial nearing jury deliberations, a prosecutor on Thursday urged jurors to convict the R&B superstar on federal charges that he used his celebrity as leverage to sexually abuse women, girls and boys for more than two decades.

“It is now time to hold the defendant responsible for the pain he inflicted on each of his victims,” Assistant US Attorney Elizabeth Geddes said in concluding her closing arguments in federal court in Brooklyn. “It is now time for the defendant, Robert Kelly, to pay for his crimes. Convict him.”

Her remarks came after an exhaustive recitation of evidence the government says proves how Kelly, with the help of some loyal members of his entourage, lured underage victims into his orbit before subjecting them to tactics from “the predator playbook”.

The tactics included isolating them in hotel rooms or his studio, subjecting them to degrading rules and punishments and making video recordings of them having sex with him and others as a means to control them, prosecutors said.

Geddes described one graphic video – seen by the jury during testimony, but not by the public – she said showed Kelly forcing one of his victims to give another man oral sex. The woman submitted “because her will had been broken”, the prosecutor said.

The defence was to begin its closing argument later Thursday. The jury could get the case as early as Friday afternoon at the trial that began August 18.

The 54-year-old Kelly, perhaps best known for the 1996 smash hit I Believe I Can Fly, has pleaded not guilty to racketeering charges. He’s also charged with multiple violations of the Mann Act, which makes it illegal to transport anyone across state lines “for any immoral purpose”.

The defendant has vehemently denied the allegations, claiming that the accusers were groupies who wanted to take advantage of his fame and fortune until the #MeToo movement turned them against him.