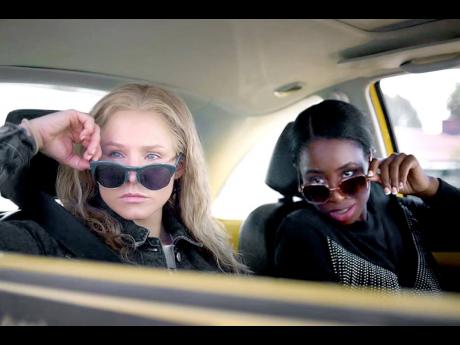 AP
Kristen Bell (left) and Kirby Howell-Baptiste in a scene from ‘Queenpins’.

Turn on your television in the last decade, and you’d likely come across a familiar premise – a mild-mannered suburbanite turns to a life of crime to help make ends meet. Consumed by greed and the thrill of a life of crime, they push their luck, becoming more ruthless as they evade the authorities. Queenpins takes that premise, but instead of your typical criminal enterprises like drugs or weapons, the protagonists of this film make their riches off the sale of counterfeit coupons.

Forged discounts on supermarket goods aren’t the most exciting trade, a fact the movie acknowledges frequently. Yet for Kristen Bell’s Connie and Kirby Howell-Baptiste’s Jojo, getting groceries at a fraction of the cost is an unmatched adrenaline rush. There’s plenty of jokes mined out of their devotion to discounts, and it goes a long way to making you care about coupons. You will walk out of the film knowing more about coupons than you ever cared to.

While they might be savvy shoppers, they’re far from the career criminals they purport to be. Much of their success in the film is largely due to the fact that coupons are not high on the priority list for most law enforcement agencies, except, of course, for Paul Walter Hauser’s Ken, a hilariously sad loss prevention officer with a penchant for spotting forgeries. Ken teams up with Vince Vaughn’s Simon, who’s giving his best performance in a long time as the straight-laced postal investigator.

The characters are the most interesting elements of the movie, but they leave a lot to be desired. Queenpins dips its toe into what makes them tick, but decides to keep things light with a steady onslaught of jokes. While they don’t always hit, I laughed at the film more than I didn’t. For a film about discounts, I can’t think of a more suitable rating.