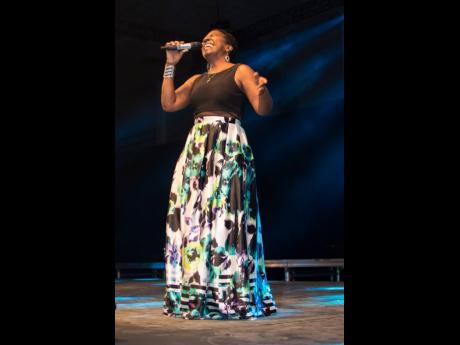 File
A thanksgiving service for the late Karen Smith will take place October 6.

A thanksgiving service for Jamaica’s songbird, Karen Smith, will be held on Wednesday, October 6, at 11 a.m. Renowned bass player Clifton ‘Jackie’ Jackson, Smith’s widower, confirmed that the service will be streamed live from the St James Parish Church in Montego Bay, a sanctuary that holds many treasured memories for the family. Her mother, Barbara Smith, has been the organist at that church for more than 30 years.

Smith, a former president of the Jamaica Federation of Musicians and Affiliates Union (JFMAU), passed away on September 11 after losing a year-long battle with colon cancer. She was 61.

“Because of the COVID-19 protocols, we will be able to only accommodate family members and a few specially invited guests inside the church,” Jackson explained, adding that a tribute is set for September 26.

Jackie Jackson Entertainment, in association with Bunny Rose Entertainment, will pay tribute to “the golden girl” on Sunday starting at 6 p.m. Jamaica time, in the virtual space, with a repeat at 9 p.m. on PBC television. Members of Smith’s immediate and musical family will share fond memories of her in-between videos of some of her showstopping performances.

“Karen’s mother, me, Courtni [their daughter] and one of my twin daughters will represent the family, and of course some of Karen’s friends from St Hugh’s and other persons in the music fraternity will all recall the good times,” Jackson said.

He used one word to describe his beloved – unforgettable – and emphasised that he was “at peace”.

“Karen found peace, so I am at peace. When I visited the hospital the Thursday before she passed, I was bawling, and I went to the doctor and said to them, ‘Give me the good, the bad and the ugly.’ They said the good thing was that Karen was not in any more pain, the bad thing was that they could not do any more for her, and lastly, ‘Where she is now, she not coming back.’ Believe it or not, the bawling stopped immediately. It was like you turned off a pipe. I strode out of that hospital and went straight to her mother to have a meeting. She is 86. I told her, ‘Mrs Smith, you are my mother-in-law for life.’ And she said, ‘But Jackie, I wouldn’t make you go anywhere’,” Jackson shared.

In paying tribute to Smith, Minister of Culture, Gender, Entertainment and Sport Olivia ‘Babsy’ Grange called her “one of the queens of stage performance” and noted that “whether she was performing at national or international events or in little country churches, she was always engaging, entertaining and charming”.

“In her performances and in her leadership role, Karen has left an indelible imprint on the culture, arts and entertainment landscape of Jamaica. She was an active contributor to the cause of industry development. We will always remember Karen’s legendary voice, engaging personality, enduring warmth and her advocacy.”

The JFMAU hailed Smith for being instrumental in reviving the federation a few years ago when the industry was hit by uncertainty, especially in the tourism sector.

“She took up the baton and fought for the rights of entertainers all across the country. She began the process of standardising the music industry, and the JFMAU is proud to continue to build on this vision,” president Lowell Lawson said.