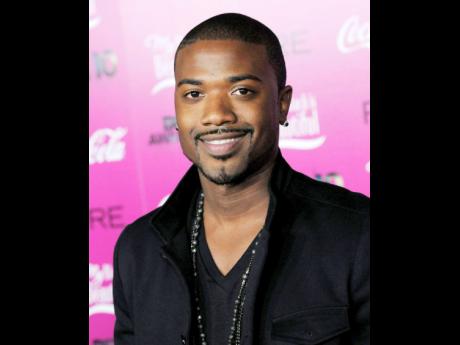 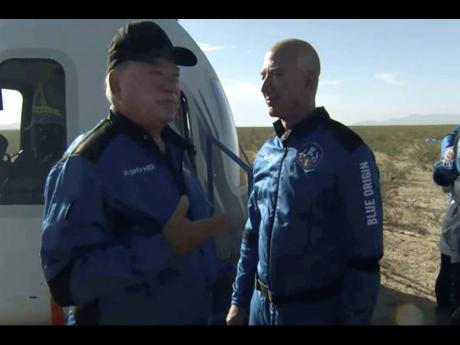 AP
William Shatner (left), talks with Jeff Bezos about his experience after exiting the Blue Origin capsule near Van Horn, Texas, on Wednesday.
1
2

Ray J out of hospital, feeling much better

Ray J is home from the hospital and feeling much better.

The One Wish hitmaker was admitted to a medical facility in Miami earlier this month, suffering from pneumonia, but he was discharged over the weekend and has also stopped using an inhaler and isn’t on oxygen any more.

While he was in the hospital, the 40-year-old star filed for divorce from wife Princess Love for a third time.

He had filed paperwork to end his marriage last September, shortly after they reconciled following Princess’ divorce petition in May 2020, but they decided to give their romance another try.

The pair even moved to Miami together with their three-year-old daughter Melody and 21-month-old son Epik in a bid to make things work.

On their decision to move their family from Los Angeles to Florida, Ray said at the time: “We’re in a good place right now, we’re in Miami, we’re gonna move down to Miami, I don’t think we’re going back to Los Angeles any time soon. We’ve been taking care of the kids, they love it out here, and it’s given us a different mood and outlook on life. God is good; we’re taking it one day at a time.”

And although Ray admitted then he and Princess are “meant to be together”, he stopped short of saying their romance was completely back on track.

He added: “We are together. Are we back together? I think that’s a journey we’ve gotta take.

“I think that’s just a journey we gotta take, but we are together; we love being together.

“Now it’s figuring out how we keep it consistent and enjoy life together and be good together, because I think we are meant to be together.”

William Shatner broke down in tears after becoming the oldest person to go into space.

The 90-year-old actor blasted off on Jeff Bezos’ New Shepard NS-18 rocket alongside Audrey Powers, Blue Origin’s vice-president of mission and flight operation, and crew members Chris Boshuizen and Glen de Vries on Wednesday from the company’s Launch Site One in Van Horn, Texas, and was overcome with emotion when he landed back on Earth.

Speaking to Bezos, he said: “I’m so filled with emotion about what just happened. It’s extraordinary, extraordinary. I hope I can maintain what I feel now. I don’t want to lose it. It’s so much larger than me and life.

“What you have given me is the most profound experience I can imagine. It hasn’t got anything to do with the little green men and the blue orb. It has to do with the enormity and the quickness and the suddenness of life and death.”

The Star Trek actor hailed the trip as a “life-changing” moment.

The crew made it up to an altitude of around 66 miles on the suborbital flight and felt weightlessness.

But just a matter of minutes later, they began their descent, and their capsule headed back down to Earth, thanks to three parachutes.

The crew touched down in the desert at a speed of around 15mph.

It was later confirmed the astronauts were all OK following the flight, and a recovery team was sent in to get them out of the capsule.

Jeff opened the hatch first so they could disembark, and the billionaire shouted: “Welcome to Earth!”

Comic book writer Tom Taylor says he could not be happier with the reaction to his portrayal of a new Superman as bisexual.

“People (are) contacting me from everywhere just saying they saw the headline and they burst into tears. They never imagined that Superman could represent them,” Taylor told Australian Broadcasting Corporation radio in his hometown Melbourne, Australia.

“I’ve also had messages from older queer people who said how much they wish they had this when they were younger and how grateful they are that this generation has this sort of representation,” he added Wednesday.

The kiss takes place on issue five of the comic book series, Superman: Son of Kal-El, which becomes available on November 9. The publisher describes the 17-year-old new Superman as bisexual.

When asked by DC Comics to write a new incarnation of the Man of Steel, Taylor said he decided “This shouldn’t just be another straight, white saga to replace Clark Kent.”

“Before I could even pitch it, Jamie Rich, who was the editor at the time at DC Comics, said: ‘Tom, there’s been an idea floating around DC Comics. What do you think of this?’” Taylor said.

“And I’m like: ‘Well, I was going to pitch a queer superman anyway, so we’re on the same page before I’ve even written a page.’ It worked out great,” Taylor added.