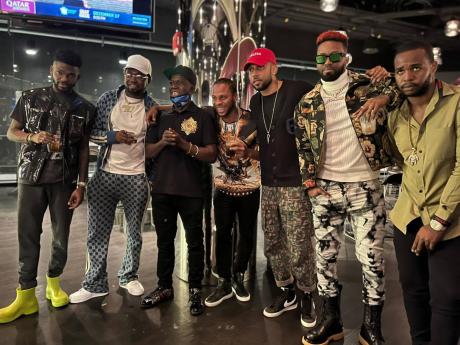 Dancehall entertainer Kemar Highcon is levitating after attending Verzuz’s ICONZ concert series at the Barclays Centre in New York over the weekend.

The 30-year-old entertainer was a guest at the concert, which marked the return of dancehall legend Super Cat to Brooklyn. Super Cat was the headline act for the inaugural show in Verzuz’s new ICONZ series held at the popular arena on Saturday, and Kemar Highcon had nothing but praise for the event.

“It may have been one of his best shows, bringing the icon back to where Super Cat broke some of the toughest barriers to this day, along with other dancehall artistes that have achieved high authority [for] the Jamaican genre in New York,” Kemar Highcon told The Gleaner. He added, “It was a good look for dancehall having the likes of Dexta Daps, Konshens, Teejay Uptop Boss and Cham, as well as veteran Barrington Levy all under the same roof. It’s definitely looking up for dancehall in this last quarter of 2021.”

The So Saucy entertainer said there is an element of old-school and old-school-type dancehall that makes it connect with the people, as was seen by the response of the crowd on Saturday.

Following the successful run that featured a number of other performances – from John Legend, DMX and Alicia Keys to Patti LaBelle, Brandy, Monica, and Gladys Knight – Verzuz creators Timbaland and Swizz Beatz sold the popular livestream song-battle franchise to Triller Network and allocated their equity stake to the 43 performers who had appeared on Verzuz to date.

Verzuz is now streamed exclusively on Triller and FITE.

As for Kemar Highcon, he recently released Shawtz & Bad Socks, for which he said the reception has been positive thus far. His next performance is scheduled for October 31 in Connecticut for the event Takeova, a collaboration between the entertainer and popular sound system disc jockey JR Chromatic. This is before he heads to Michigan, Chicago and Washington DC, as he tours the US.

“I am trying to stay focused on my career. The disc jockeys in my immediate circle are promoting the single, and my next big release won’t be until January of next year; until then I am performing,” said Kemar Highcon