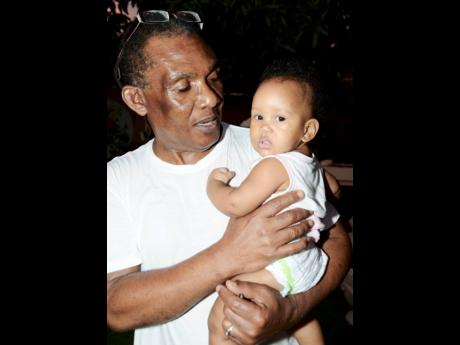 Contributed
Ken Boothe holds a young Sabrella, his granddaughter. The first single from Boothe’s ‘Wait For Us’ children’s album was released in October, along with an accompanying music video, which sees Boothe singing with children, three of whom are his now older granddaughters – Abrella, Sabrella, and Gabrella. 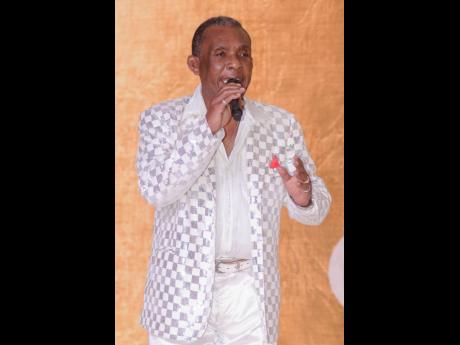 After more than 50 years in the music business, Ken Boothe has more songs and albums than his age on the calendar. From rocksteady to reggae to R&B, he has sung them all, gaining quite a bit of international stardom while on his fantastic musical journey. However, the veteran vocalist, who was invested into the Order of Distinction by the Jamaican government in 2003, is briefly embracing a slightly different path – he is singing lullabies. The proud father, grandfather, and great-grandfather is putting the finishing touches on his passion project, his very first children’s album. And he is as excited as a kid in a candy store. Titled Wait For Us, the album is a realisation of one of Boothe’s dreams.

ALWAYS WANTED TO DO A CHILDREN ALBUM

“I always wanted to do a ‘souls’ album and a children’s album. The ‘souls’ album is completed and sitting on the shelf. The distributor thing is a problem, but the great thing is that good music can’t stale; it’s like honey. And now I have the album that is all about children because hardly anyone is focusing on them, and kids need special attention in these serious times in which we are living,” Boothe shared.

The first single from the project was released in October, along with an accompanying music video, which sees Boothe singing with some kids, three of whom are his granddaughters – Abrella, Sabrella, and Gabrella – who are all named after his hit tune Artibella from his 1968 album, Mr Rocksteady. The girls live at his home and no doubt played a role in inspiring this album, but Boothe hastily pointed out that he doesn’t have any favourites and he “loves all his grandchildren the same”.

“I am really looking forward to seeing the reaction to Wait For Us,” said Boothe, who shared that his advancing age has seen him slow down a bit, especially when it comes to his well-documented high-energy levels on live performances. “But we accept that these things come with age, and at least we are still here to enjoy and appreciate life and are still doing the things that we love. I am still recording songs in my studio at home, and I am still doing dubplate specials for various sound systems,” said the Freedom Street singer, who released his memoir, My Iconic Musical Journey, in 2019.

Wait For Us, which will be released this month, comprises eight tracks: Theo the Lion, Hush Baby, Deep and Wide, Clap Your Tiny Hands, Michael, and Row Your Boat. “We brought in Robbie Lyn to play live instruments, and I must also thank the parents, staff, and principal of St Richard’s Primary School for allowing some of the students to provide background vocals on the album,” the legendary vocalist said.

According to the producer, Rickane Scott, Wait For Us is “fun and interactive and designed for the entertainment of children”. Scott is a relatively new producer, and this is his first major solo project. He shared that not only was Boothe as involved in the overall production as he was, the singer had fun.

“People might find it strange that Ken is doing a children’s album, and I admit that it is a bit different, but the truth is that we can’t keep pushing adult entertainment on kids. And, really, Ken is just a big kid himself; he enjoyed himself. This means a lot to him, and he is totally involved in the process. He listens back to the recordings, and if the note is a bit off, he goes back in the studio, and he does it over,” the father of one explained.

Both Scott and Boothe have the same vision for this children’s album. They hope that other Jamaican artistes and producers will listen to it and be inspired to jump on board by putting out more music geared at children.