Artiste reflects on song that struck a cord personally and professionally 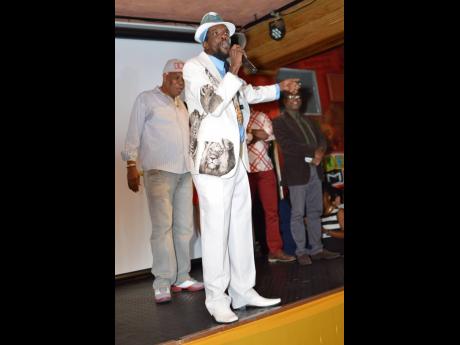 File
Major Mackerel describes ‘Love Life’ as ‘a begging song’, one he had hoped would help him mend fences with the woman he was with.

“It takes two to make the thing go right

Wife and a husband, husband and a wife

Never reach the top without a fight

Carry-go-bring-come a something weh mash up love life…”

The lyrics, taken from Major Mackerel’s 1994 jam Love Life, struck a chord with fans whenever he went on tour. But what fans didn’t see was a broken-hearted deejay pulling out all the stops to regain tainted love.

“It’s a begging song,” Mackerel told The Sunday Gleaner. “Mi do that song with a expectation seh [the woman I was with] woulda hear it and come back to me, but it was all too late. She had already found happiness somewhere else. The response to the song by fans was great, but the reaction was bad for me because I was still broken-hearted for many years.”

Mackerel said at the time he was young and at the top of his career, touring with peers.

“We go to America, and I was messing around on her, and someone told her,” He alleges that as result, she returned the favour. “Mi give her bun, but she give me patty, coco bread, bun and cheese, tutti frutti, plantain tart. It was Easter every day. It was like a sledgehammer inna mi heart,” he said.

The artiste initially held the view that “no one relationship could control me” but found himself doing all he could to repair the union, including recording the Winston ‘Wee Pow’ Powell track.

“Mi buy her roses, flowers, invite her out, offer her material stuff, try to do the things I never do for her before, but it show you seh money and material things cannot buy a man or woman happiness,” he said. “I realise when a relationship is ending, the spouse does not remember the good that you did. They remember the bad things you did and the good things you never did.”

Most important, he learnt that he could not be on the receiving end of infidelity and thus decided to retire from his Casanova lifestyle.

“After that relationship, mi never find myself with more than one woman at a time, and I try not to play with nobody heart no more because I did not like how I felt when my own was broken. I don’t wish that pain on my worst enemy.”

His advice to men and women playing ‘unfair games’ is to “not play with people heart. The heart doesn’t have a bone yet it can still be broken, and when it broke, it took years and years to mend, so I learn not to play with nobody heart no more”.

Mackerel’s openness about love and relationships is an oddity for Jamaican men, amplified by his title as a veteran dancehall artiste. He, however, said he has learnt the hard way how harbouring hurt and secrets can affect the mind, body, and soul.

“Most of us as artistes, the songs that we write are really true stories, but we just don’t call names in it,” he said. “We all have broken heart – Sizzla sing about it in Dry Cry. I’m not scared to express and tell anyone. Some man just nah tell dem story. Shabba, Super Cat, all a we used to live in America, so everybody not telling dem story, but I’m not scared to express my honest opinion, feelings, and experience.”

He stayed in the States for almost 22 years, partly pursuing the lost love, but also raising five sons. He returned to Jamaica in 2011.

“I regret staying in America so long, but I don’t regret my children,” he said. “One a di time I was with my children alone, and I had to be mommy and daddy: wash clothes, clean house, mek pancake and eggs … . I kinda mould them out and teach them things weh only a father can teach them.”

Among them are his lessons on love, but he said he also learns from his sons.

Today, Mackerel is happy to be in a loving and committed relationship.

“With love, sometimes you will a walk pon the road, and you see your wife and walk past her and don’t know it’s your wife,” he said. “I have a special someone, I have love, and I have someone that cares about me a lot.”