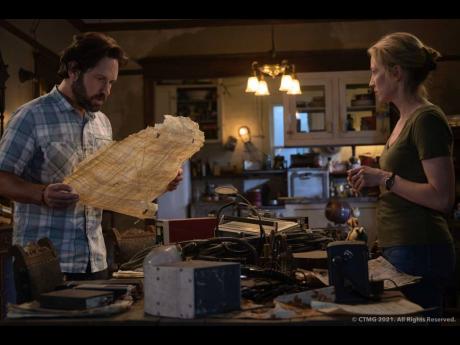 For the second time in five years, there’s a new Ghostbusters movie in cinemas. Yet another attempt to recapture the lightning in a bottle that was the 1984 classic. A quality modern-day Ghostbusters seems to be as elusive as the spectres they catch. It’s not easy to match up to a cast as charming as the original, and attempts to pay homage to what came before often end up feeling like more of the same.

Ghostbusters: Afterlife is a little different, up until the point where it isn’t. The movie has a spooky opening, taking the series out of the city and into the middle of nowhere. After a ghost attack leads one reclusive farmer to meet his maker, his surviving estranged family arrives to pick up the pieces of what he left behind.

Carrie Coon plays a financially strapped mother of two, both of whom are suffering from different variants of social awkwardness. Finn Wolfhard is the image-obsessed teen, and Mckenna Grace the subdued bookworm. The film establishes their family dynamic as its foundation, giving it a strong emotional centre as the movie gets into its mysterious plot.

Seeing a Ghostbusters film in a more rural environment is a welcome change of pace. It allows the film to stretch the series further than its roots. Certain moments, like the visual of the iconic Ecto-1 tearing through a wheat field, make the film stand out against previous iterations.

It’s puzzling, then, that while the film goes to great lengths to distance itself from what came before, much of the movie’s second half is devotional to the original film. While the movie’s characters are interesting to watch with the more familiar plot elements, I couldn’t help but feel a little cheated. Rather than an original conflict, Ghostbusters: Afterlife is a carbon copy of its predecessor.

Despite being a near beat for beat reiteration, the movie does manage to raise the stakes. The finale is grand and tense, and brings some of the film’s most emotional character arcs to a strong resolution. On top of which, Ghostbusters: Afterlife is a consistently funny movie that doesn’t break the movie’s momentum for the sake of humour. What it lacks in originality, it makes up for with strong characters, good pacing, and an all-around well-balanced adventure.