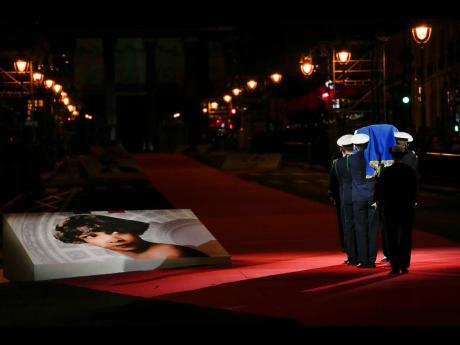 AP
Pictures of Josephine Baker adorn the red carpet as the coffin with soils from the US, France and Monaco is carried towards the Pantheon monument in Paris, France, on Tuesday, where Baker is to be symbolically inducted, becoming the first black woman to receive France’s highest honour. Her body will stay in Monaco at the request of her family. 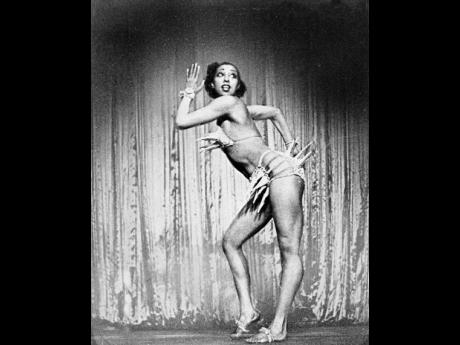 AP
Performer Josephine Baker strikes a pose during her Ziegfeld Follies performance of ‘The Conga’ on the Winter Garden Theater stage in New York, February 11, 1936.
1
2

Baker’s voice resonated through the streets of Paris’ famed Left Bank as recordings from her extraordinary career kicked off an elaborate ceremony at the domed Pantheon monument. Baker joined other French luminaries honoured at the site, including philosopher Voltaire, scientist Marie Curie, and writer Victor Hugo.

Military officers from the Air Force carried her cenotaph along a red carpet that stretched for four blocks of cobblestoned streets from the Luxembourg Gardens to the Pantheon. Baker’s military medals lay atop the cenotaph, which was draped in the French tricolour flag and contained soil from her birthplace in Missouri, from France, and her final resting place in Monaco. Her body stayed in Monaco at the request of her family.

“Josephine Baker, you are entering into the Pantheon because (despite being) born American, there is no greater French (woman) than you,” he said.

Baker was also the first America-born citizen and the first performer to be immortalised into the Pantheon.

She is not only praised for her world-renowned artistic career, but also for her active role in the French Resistance during World War II, her actions as a civil rights activist and her humanist values, which she displayed through the adoption of her 12 children from all over the world. Nine of them attended Tuesday’s ceremony among the 2,000 guests.

“Mum would have been very happy,” Akio Bouillon, Baker’s son, said after the ceremony. “Mum would not have accepted to enter into the Pantheon if that was not as the symbol of all the forgotten people of history, the minorities.”

Bouillon added that what moved him the most were the people who gathered along the street in front of the Pantheon to watch.

“They were her public, people who really loved her,” he said.

The tribute ceremony started with Baker’s song Me revoilà Paris (Paris, I’m Back). The French army choir sang the French Resistance song, prompting strong applause from the public. Her signature song J’ai deux amours (Two Loves) was then played by an orchestra accompanying Baker’s voice on the Pantheon plaza.

During a light show displayed on the monument, Baker could be heard saying, “I think I am a person who has been adopted by France. It especially developed my humanist values, and that’s the most important thing in my life.”

The homage included Martin Luther King’s famed I Have a Dream speech. Baker was the only woman to speak before him at the 1963 March on Washington.

Born in St Louis, Missouri, Baker became a megastar in the 1930s, especially in France, where she moved to in 1925 as she sought to flee racism and segregation in the United States. Baker died in Paris in 1975 at age 68.