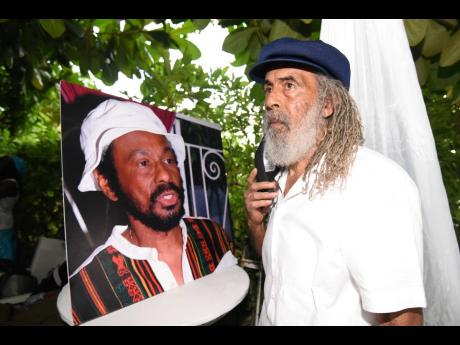 Kenyon Hemans
Allan ‘Skill’ Cole, to whom Carlton ‘Pee Wee’ Fraser was like a brother, stands by a picture of him, as he enters Inna De Yard last Wednesday. 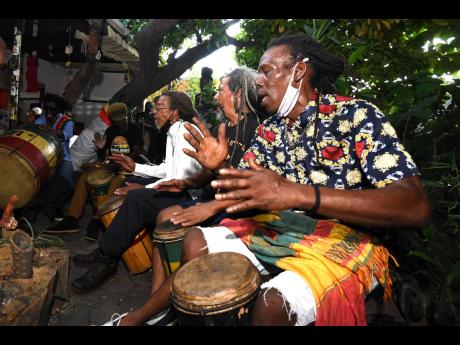 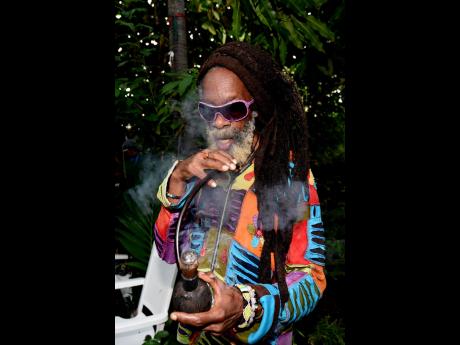 Kenyon Hemans
Reggae royalty, Earl ‘Chinna’ Smith, takes a hit of his chalice, as he speaks glowingly of his friend, Carlton ‘Pee Wee’ Fraser, at last Wednesday’s Groundation which he dedicated to his memory.
1
2
3

In Rastafari, the touching of the ‘groun’ signifies the unification of the body and the Earth, and when the element of rain is added to that synergy, the showers are hailed as blessings. For that reason, the rain did not mark the end of the spiritual Groundation, held last Wednesday at Inna de Yard in St Andrew Park. Instead, the sunset showers took the vibe to a whole other level.

Without missing a beat, literally, the drummers and attendees relocated to shelter and the Groundation, which was dedicated to Twelve Tribes of Israel’s physician, the late Carlton ‘Pee Wee’ Fraser, continued seamlessly. In fact, the energy was upped a few notches, if possible, prompting chanter and drummer, Brian Gold (of Brian and Tony Gold fame), to arise and spiritedly lead the tribe in singing.

One attendee commented that it was the first time that so many women had turned out to the monthly first Wednesday event, and sing they did, as they blended their melodious voices with the chanting and the insistent call of the drums from the famous Binghistra drummers.

They sang the songs from the official songbook of Rastafari, but everybody had the words in their heads, whether it was the traditional songs of praise and remembrance, warnings to Babylon or chants of war and the songs of freedom from slavery.

It was a day on which conversations centred around ‘Doc’. An oversized picture of him greeted those who came, and stories of his goodness and selflessness abounded, interspersed with whispers of who he told what about his final wishes. However, there was quiet chatter, too, of what should have been and who treated him without due respect and failed to accord him the honour he truly deserved.

Pee Wee’s long-time friend, Allan ‘Skill’ Cole, who, along with Pee Wee, was in the inner circle of reggae icon Bob Marley, officially paid tribute to a man who “was not concerned with material things”. He told T he Sunday Gleaner that even when he and Dr Pee Wee were in Germany with Marley, who was being treated for cancer, “Pee Wee never asked for a cent”. He hinted at what he said was the “sad treatment by those who should know better”.

Cole added, “But we give thanks that we have good people around still, like Bro Chinna [Smith], who is also a people person who understands. He is a part of what we call the progressive. What he is doing here today is very uplifting. It is something that we love. All is not lost because if all was lost, there would have been some serious catastrophe. We give thanks for people with good thought, and the brother will rest well.”

Earl ‘Chinna’ Smith, the legendary guitarist who played on several tracks with Marley, hailed Fraser for understanding the assignment he was given here on Earth and for his service to Israel.

“Pee Wee know that we as Rasta, we don’t have any insurance. These natural doctors today, yuh have to have big money to go and see them. Pee Wee was a man who honoured the Hippocratic Oath,” Smith said.

In a recorded speech, former People’s National Party president and one-time Twelve Tribe member, Dr Peter Phillips, paid tribute to Fraser, a former Reggae Boyz team doctor, as a “quiet, kind, courageous, soft-spoken youth who was willing to give of his medical talents to everyone who needed them, no matter their financial circumstances”.

“Jamaica and indeed Rastaman and woman worldwide and the entire African diaspora, indeed the world should be celebrating the life of this Jamaican youth grown into manhood who saw his life as a life of service. Long live Pee Wee. Long live the memory of Dr Carlton Fraser. Bless up,” Phillips concluded.