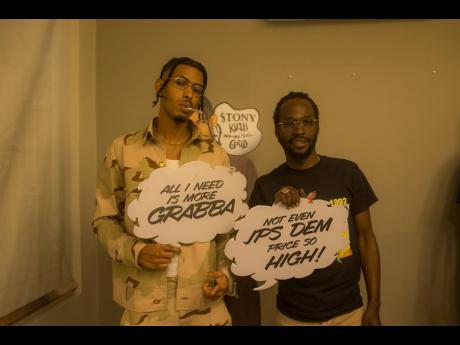 Zac Jone$ first dreamt of having his own cannabis product like Wiz Khalifa and Curren$y while living in Los Angeles years ago. With the launch of the $tony Kush, a collaborative strain between himself and OHJA Herb House, Jone$’s dream is now a reality.

The strain was launched at OHJA’s Barbican location as Jone$’s and Jesse Royal’s The Weed Song buzzed in the background.

“Anything I do, I have to believe in it fully and be behind it, so $tony Kush is literally my full belief in a cannabis product,” Jone$ told The Gleaner. “As with any brand I decide to work with it, it had to be something I could really integrate into my lifestyle. With $tony Kush, I can be creative on it, be in nature and have fun at the beach without having a bad after-effect like being too tired or wanting to sleep, and still having [the] energy to come up with creative ideas and then actually work on them the same day. I couldn’t really do that before with a lot of other cannabis. It’d be a great high but then mi shell out or a bad high and then mi paranoid, so to me, this is the perfect strain for a $tony life.”

“It’s really nice; it would almost be like chocolate,” Grant told The Gleaner. “It’s perfect for morning-time use and imbues creativity, so if you’re a creative, it’s a number one recommend. Even if you’re an executive or just anyone waking up in the morning and you need energy without going towards unhealthy ways such as caffeine which destroys the body, try $tony Kush.”

OHJA was launched during the pandemic and provides medicine at affordable prices while challenging negative stereotypes about cannabis consumers.

“We’ve received enormous support, and the brand has grown exponentially with ambassadors like Zac Jone$ and Tip God Music on board,” Grant said. “Ever since Zac has come into the company, we’ve just been in straight alignment because he believes in quality over quantity, and it’s the same thing we believe in. Our farmers are sagacious in the way they manicure our plants, so just as Zac is picky with his beats to create perfections like The Weed Song, so are we to create great products and provide good vibes for people.”

“With this role, I just want to basically do what we’ve done tonight: bring creatives to OHJA, which I believe is a creative hub,” he said. “Cannabis is essential to a lot of creativity… Even if you’re not creative, it helps you creatively or medicinally, and I want to bring that energy and community to OHJA to partake in great, organic cannabis as well as to fully express themselves. Look out for more events like this, more creative things like $tony Sundaze and $tony Stoner Life, and us working with a lot more artistes and creatives.”