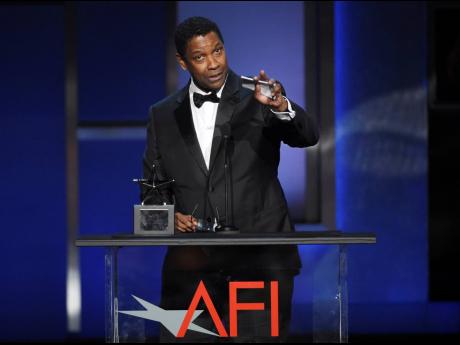 Denzel Washington knows he’s “only got so much time left”.

The 67-year-old actor admitted that the passing of his mother, Lennis, last June has made him question his purpose as a human being, so he is determined to “contribute” as much as he can with his life.

“I started to understand that you’re only here for a time and then you’re out. I’ve only got so much time left,” Washington said.

“But I’m excited about the future and want to contribute. Not about lifting people up — I’m not heading down that road. I’m just an actor. I’m an ordinary guy, with an extraordinary job. But I like my job.”

The Tragedy of Macbeth actor admitted that his awareness of his mortality has given him a new drive in his career, and he’s keen to work with “the great” film-makers while he can, so he has been in touch with Paul Thomas Anderson, Alfonso Cuaron, and Steve McQueen to discuss the possibility of working with them.

He told Sunday Times Culture magazine: “Actually, I spent the day with Paul. I went to his house. You know, I thought about the top film-makers because I’m not going to do many more films. I know that. So I want to work with the best.

“I called Steve! I need them to push me. Steve seems lovely. We kicked around ideas. I want to work with the greats. I need that ... .

Leah Remini a student at NYU at age 51

Leah Remini has been “living and working with an eighth- grade education”.

The 51-year-old star has reflected on growing up in the Church of Scientology and how she was treated like an adult from a very young age.

Sharing a black and white photo taken at the start of her acting career, she wrote on Instagram: “This photo was taken when I was 16. I was so proud of this headshot. I thought my side pony made me look so versatile and like the consummate actress.

“By this point, I had been living the life of an adult for years even though I was just a kid.

“Scientologists are taught that kids are no different from adults. So from a young age, I was held accountable like an adult and regularly told that anything bad that happened in my life, even things that I wasn’t responsible for, was my fault.

“Even though I was just 16 at the time, I hadn’t received any sort of formal education for years. Instead, I was working to earn a living to support myself and my family. For the last 38 years of my life, I have been living and working with an eighth-grade education.”

The King of Queens star explained how she turned to acting as a “salvation” to raise her position in the church and lift her family out of poverty.

“At the time we were living in squalor with no furniture. Every spare cent we had went to Scientology, and I was determined to get my family into better circumstances. I auditioned but was repeatedly told that my brash approach, and thick Brooklyn accent, was taking me nowhere fast. It wasn’t until a voice teacher and casting director discouraged me from losing my brashness and accent that I started getting acting gigs,” she said.

Remini has recently returned to her studies and is amazed at how far she’s come since leaving the controversial faith.

She concluded: “Had you told me then that I would be a student at NYU at age 51, I wouldn’t have believed it. I had big dreams, but looking back, they were rooted in my desire to survive, not to educate myself. And the idea that I would leave Scientology and work to expose the abuses that members face was not a thought I would even conjure up. Had I heard that anyone else was doing that, I would have seen them as an enemy worthy of punishment.”