Review: ‘Scream’ – Not quite clever 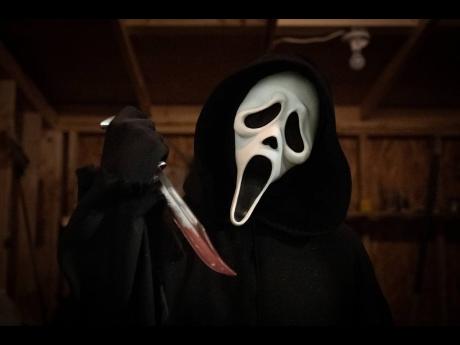 AP
This image released by Paramount Pictures shows Ghostface in a scene from ‘Scream’.

Of all the killers in the world of horror, Ghostface is particularly unique. With a simple black cloak and a perpetual scream, the killer of the Scream franchise is defined by the ‘rules’ set forth by the killers of other horror films. At least, that’s how it used to be. Now, 25 years since his grand debut, Scream and its main villain, is less concerned with the protocol of other big-screen slashers and is now fully obsessed with itself.

In many ways, the series was always destined to reach this point. After skewering the tired tropes of slasher films, the sheer longevity of the series has resulted in the development of a few clichés of its own. Scream has essentially become the very thing it satirised while also providing some takedowns of blockbuster cinema. The film pokes fun at the never-ending nature of the modern film franchise, citing the sins of series like Star Wars and Halloween.

All of this is not nearly as interesting as the movie would think. Scream presents a biting commentary on the way audiences respond to the movies of today, but it then proceeds to fall into the same traps that it decried only moments prior. Scream is less of a refreshing take and is more adequately described as yet another tired unnecessary sequel.

Perhaps the point of Scream is to be as frustrating as it is. The film clearly is having fun with itself and is unashamed in its full-fledged adoption of the tropes it lampoons. The appeal to nostalgia is strong with this film, but, as with every sequel with a history as great as Scream, your enjoyment of it is entirely dependent on how much you enjoy that history.

If you’ve stuck with the series up until this point, you’ll no doubt be thrilled at the returning cast, many of which get a fitting send-off for their characters. The film has fun with its murderer in the dark story, as it always does, and it makes for a good time as you play along with the mystery. Scream is sure to please its acolytes, who will likely be first in line for viewing in a dark cinema. For everyone else, you can surely wait until you’ve stumbled on the latest from this once-clever franchise and give it a watch in your spare time.

Rating: Catch it on Cable.