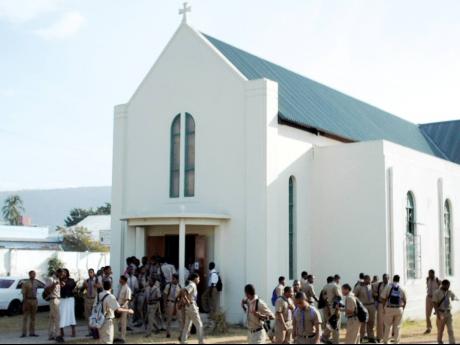 Contributed
On February 6, the St Augustine Chapel, seen here in a 2010 file photograph, will be celebrating the 75th anniversary of its establishment.

Many will mark February 6 as the birthday of reggae icon Bob Marley, but if you are a ‘College man’, then February 6 has its own revered distinction – it is the day in the year 1947 when Kingston College’s St Augustine Chapel was dedicated by Archbishop Hardie “to the glory of God”.

The “union of religion and scholarship” has been the primary aim of the noble institution, Kingston College, and according to the records, this was one of the principles which St Augustine of Hippo upheld.

The history of the St Augustine Chapel and the Kingston College Chapel Choir is closely intertwined. On February 6, 2022, the St Augustine Chapel will be celebrating the 75th anniversary of its establishment. And the multi-award-winning Kingston College Chapel Choir (the second oldest continuous choral group in the region) will also be marking a similar milestone.

There are certain features of St Augustine Chapel that deserve their own story. The pulpit was carved in Jamaican mahogany by Alvin Marriott, Jamaica’s world-famous sculptor. The pews were built by J.N. McKenzie of Handicrafts Ltd., and the chancel furnishings by Theophilus Jackson. Both men were pioneers in producing and designing high-quality period furniture, and their works are in famous collections worldwide. The beautiful and dramatic Resurrection Scene East Window, over the altar, was funded by the old boys in memory of the five boys who fell in World War II.

The two-manual organ, which was manufactured b J. M. Walker & Sons, arrived in 1949. It was fully paid for out of contributions from old boys, parents, students and friends of the school. It was installed in memory of the late Edeline Soutar, the first music mistress, at a cost of over £2,300. Over many years, the organ was in need of a factory overhaul and was undertaken by an old boy, Dennis Lalor, in 2018 at a cost of $23 million. The organ is yet to be installed due to the COVID-19 pandemic.

The financing of the Chapel, its furnishing and accessories came from a number of sources. The largest gift of £2,000 was from ‘A Friend of the School’ (believed to be Eddie Hanna). A parents’ committee headed by H.A. Manley raised £751. The KCOBA raised over £2,000 for the purchase of the organ and school furniture. The British Society for the Propagation of the Gospel provided £350. The New England Company, the oldest missionary society in the world, provided £220, and the boys collected £200. A loan of £2,000 from the Diocese was quickly paid off.

Bishop Gibson, a great lover of music, was not a musician. However, the second master, Douglas Forrest, was a good tenor/baritone, a pianist and a good organist. Through their influence, Kingston College has developed a strong musical tradition in church music, which has been the basis for the successful careers in classical, church and popular music of many well-known Jamaican artistes.

Audley Davidson, the present director, who took charge of the choir in August 2008, told The Sunday Gleaner that “When the school was founded, the age of radio and TV was yet to arrive. Live concerts were the only means of presentation, and the Church was the great source of most organised musical activity throughout the country. Since World War II, the world has seen a revolution in communication and choirs are under great pressure to survive outside their roles as leaders of church services. The K.C. Chapel Choir was the most renowned school choir in Kingston and, in the years immediately after Independence in 1962, attendance at its concerts was regarded as a social duty.”

There have been seven choirmasters, among them Donald Morris, Barry Davies, Wayne Moore and Gordon Appleton. Interestingly, Donald Morris was the first Jamaican director and the first former chorister to ascend to the directorship of the choir. He had been trained by Davies and succeeded Gordon Appleton in 1976.

In the early days, the choir sang primarily at Chapel Services during the week and occasionally on Sundays. However, the choir ventured beyond the St Augustine Chapel walls over time. Today, the choir has increased its visibility averaging about 45 performances per year, with the highlight being the Annual Christmas Concert season.

Overseas tours were added in the 1980s with tours to the Cayman Islands, New York and Miami. In 2012, the choir toured Washington, DC, performing on the grounds of the National Cathedral as part of the official programme in recognition of Jamaica’s 50th Anniversary of Independence.

The choir has made a number of recordings and has also made several local television appearances, appearing almost annually at Christmastime since the mid-2000s.

In the 1970s, the Kingston College Chapel Choir was elected to the St Nicholas Guild of the Royal Schools of Church Music, the first Jamaican Choir so elected. During this time, the choir also recorded Christmas carols for use by the BBC in its worldwide broadcast.

In celebration of the choir’s 60th anniversary, the renowned Christ Church Cathedral Choir from Oxford presented joint concerts with the Kingston College Chapel Choir. The choir has also performed with other visiting choirs from the UK and North America. In December 2010, the postmaster general issued a $60.00 postage stamp bearing the image of the Kingston College Chapel Choir.

Annually, since 2012 (except for 2014), the choir has participated in the Associated Board of the Royal Schools of Music (ABRSM) examinations, consistently obtaining distinctions and merits.

In October of 2018, the choir was awarded a Silver Musgrave Medal for its outstanding contribution to music. The Musgrave Award is one of the oldest awards of its kind in the Western Hemisphere and was awarded for the first time in 1897.

Under Davidson’s leadership, the choir’s repertoire was expanded by adding and commissioning choral arrangements of contemporary and Jamaican popular music while maintaining the fine tradition of sacred music.