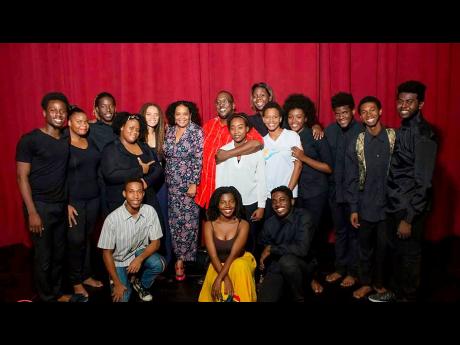 Tribe Sankofa, a performing arts collective of multi-talented, vibrant and eclectic performers, will celebrate their 10th anniversary this year. The group plans to execute a series of events reflective of their core values, while celebrating the milestone and paying tribute to their allies and supporters, who, through the years, have encouraged and facilitated the collective’s growth.

Tribe Sankofa was founded in 2012 by its artistic director, Fabian M Thomas, who describes their niche as “ ... borrowed and original spoken word/poetry, soulful song-styling uniquely blended with other visual and performing arts”.

The collective, since its inception, has sought to introduce a new dynamic to Jamaica’s theatre arts landscape and the world at large. They have shared their interpretations of works by critically acclaimed poets and writers such as Lorna Goodison, Derrick Walcott, Olive Senior, Mervyn Morris, Oku Onuora, Claude McKay, Toni Morrison, Sunni Patterson, Rudy Francisco and Paul Laurence Dunbar. The group has also presented unflinching examinations of issues such as police killings/brutality, gender-based violence, racism, blackness and self-discovery.

Thomas and his tribe have shared their distinctive style and repertoire in various spaces, including the Lignum Vitae Awards, Gungo Walk Alternative Music and Arts Festival, Arts in the Park, and the investiture of the Poet Laureate of Jamaica. The collective proved their determination to their mission in 2017 when they performed at Carifesta 2017, despite having funding issues and not being a part of Jamaica’s official contingent. Their resilience has further been proven through their quick adaptation to the changes brought by the COVID-19 pandemic. The collective overcame the obstacles posed, pivoted and presented its first virtual season via Zoom in August 2020.

The year-long celebration to mark their 10th anniversary will include the launch of their first chapbook of original writings, a 10th anniversary GoFundMe initiative, world premieres of two mini documentaries, and an assortment of performances, tributes and recollections.