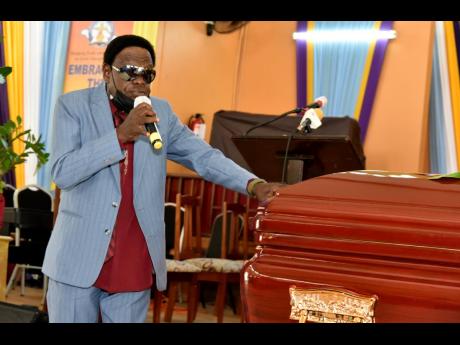 Kenyon Hemans
Judge Diamond gives a musical tribute during the thanksgiving service for the life of his friend Fitzroy ‘Bunny Diamond’ Simpson. 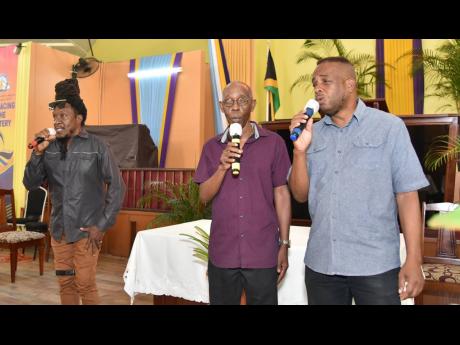 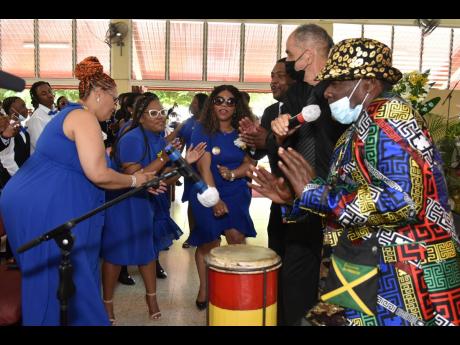 Kenyon Hemans
Bongo Herman (right) is joined by Bunny Diamond’s daughters, who all dressed in blue, as he gives a spirit-filled musical tribute to the legendary singer.
1
2
3

Members of the entertainment fraternity showed up at the Boulevard Baptist Church on Thursday as they joined family members in showing their love and appreciation for one of their own, Fitzroy ‘Bunny Diamond’ Simpson, who passed away on April 1.

Led by Minister of Culture, Gender, Entertainment and Sport Olivia Grange, among those who were present were saxophonist Dean Fraser, whose mother passed away on Wednesday night but who said he had to be at Bunny’s thanksgiving service; producer Gussie Clarke; Blackbeard; Ruddy Isaacs, the brother of the late, great singer Gregory Isaacs; Frankie Campbell and Grub Cooper of Fab 5 band; International Reggae Day founder Andrea Davis; Teddy Laidley; Carlton ‘Dehdeh Blacks’ Scarlett of the Heptones; percussionist Bongo Herman; Baggaa Case; and Chris McDonald .

Of course, Judge Diamond, the only surviving member of the legendary trio known as the Mighty Diamonds, gave a tribute in song, celebrating the life of a man who he knew since school days. Other musical tributes came from Bagga Case, Bongo Herman, Apostle Kereen Gregory, and Dehdeh Blacks, who, accompanied by Grub Cooper and Chris McDonald, performed the Heptones classic, Sea of Love.

“The Diamonds are one of my influences, so I had to be here. I really wanted to sing a Mighty Diamonds song, Have Mercy, but they didn’t have the riddim, so I just did a Heptones song instead,” Dehdeh Blacks told The Gleaner.

Bongo Herman – despite making a plea for those who have gone before “not to file for [him]” – was in a festive mood. His claps from the audience, accompanied by the beat of his drum, started a musical conversation that had Bunny Diamond’s daughters - Jillian, Rosemarie, and Ronece - out of their seat and ‘performing’.