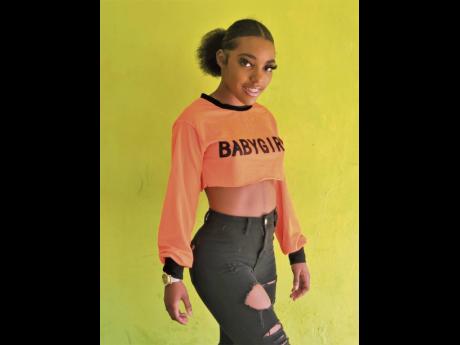 Contributed
Jaesinco said she is pleased with her rehearsals for her Reggae Sumfest debut.

Tours, travel, and collaborations – these are some of the goals of the 18-year-old, up-and-coming artiste Jaesinco.

Discovered by her now manager through a post on social media, the young recording artiste had quite the unexpected start in music.

“I always wanted to do music, but I never knew how to get into the music world. I actually voiced a song for a producer, and I reposted it, and my current manager saw it. I was young, so it had to go through my mom, and we created rhythms and took it from there,” she told The Gleaner during a telephone interview.

The Mona High alumni hopes to develop her career as she continues to get older. Having knowledge of the competitiveness of the music industry, Jaesinco hopes to learn more about her talent and the inner workings of the industry.

Although she is looking forward to debut at Reggae Sumfest on Friday night, she admitted that she was feeling nervous.

“I am not gonna lie, I am a bit nervous, but I am looking forward to it. I gotta go out there and do my best,” she said. She stated that she believes that the upcoming debut will bring about a major change in her music career. She sees her nerves as a good tool to help her to execute her performance.

Since starting preparations for her largest live staging, she stated that she is feeling pleased with her rehearsals. She characterises working with her first band as easy, fun, and successful.

Jaesinco, whose given name is Justina Sinclair, has been consistent in producing music since 2016; however, she had put a pause on her music to focus on her studies.

Born and raised in Kingston, Jamaica, she stated that some of her favourite artistes are Stalk Ashley, Koffee and Kranium, among many others.

She is known for songs such as Slowly, It’s A Blessing, Jah Will Provide, Believe Me, and Warning.

Jaesinco will perform on Festival night one, along with other emerging acts, including Moyann, Shella Topstar, Jah Fabio, and Tee Bone.