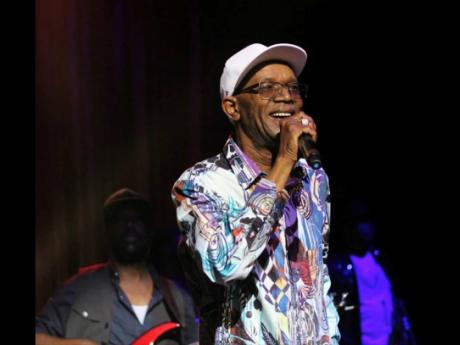 File
Beres Hammond in performance at Reggae Sumfest last month, shortly after which he left the island to start his Solid Love tour in the United States.

Jamaica’s Godfather of Lover’s Rock, Beres Hammond, is on the road again with his Solid Love tour. One of the year’s most anticipated concert tours will make stops in 13 cities across the United States. It kicked off last Friday, August 12, and runs until September 4.

Last Friday, Beres and his entourage played at the College Street Theater in New Haven, CT; on Saturday it was the NJPAC in Newark, NJ, and last night the reggae crooner jammed inside the Ford Amphitheater at Coney Island Boardwalk in Brooklyn, NY.

Over the course of his 50-year long career, Beres has poured his smoky-sweet voice over every kind of riddim track, from the funked-up reggae jams of the ’70s fusion band Zap Pow to the lush instrumentation of his 1976 album Soul Reggae to the spare digital beat of his 1985 dancehall breakthrough What One Dance Can Do.

In 1990, his album A Love Affair for Donovan Germaine’s Penthouse label raised his popularity to new heights. Cuts like Tempted To Touch and Who Say with Buju Banton are still as effective in the dancehall today as they were as pre-releases. The ’90s proved to be Hammond’s decade, during which he blazed a trail of modern classics for a variety of producers, from the strugglers’ anthem Putting Up Resistance (Tappa) to lovers’ laments like Come Back Home (Star Trail) and Double Trouble (Steely & Clevie).