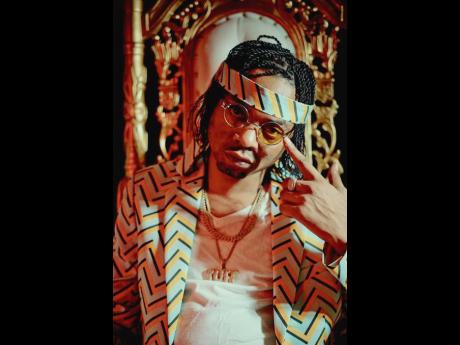 Contributed
Rygin King, who emerged on the dancehall scene in 2017 with the hit single, ‘Tuff’, released his debut album, ‘Therapy’, earlier this month.

For dancehall’s Rygin King, a Grammy nomination would be more reason to persevere with his career in music. Although considered slightly controversial to many recording artistes, locally and internationally, who say there is no transparency in how the nominee selection is made, the 27-year-old deejay has shared that receiving recognition from the Recording Academy is a goal for this year and beyond.

“Every artiste that get the chance to go the Grammy Awards is God first bless them and help them to reach there. I want to see my album do great ... me just want to see it go there,” Rygin King told The Gleaner.

The dancehall artiste officially released his debut album, titled Therapy, on September 9, just in time to make the eligibility period of submissions for the 65th Grammy Awards. Rygin King is already celebrating the success of the 11-track project which sold 750 units during the first week of its release in the US and is pushing big streaming numbers.

He has previously expressed that while earning a Grammy for any body of work is a significant accomplishment for music professionals, performing on the stage would be an ultimate win especially for the dancehall community.

“I want to know if the dancehall is going to the Grammys because right now it is limited because of our own culture. Lemme tell you wah gwaan wid dancehall … too much bad mind and nobody want to push nobody forward,” Rygin King said.

He added, “There is no representation or no type of board for dancehall fi say, help make one artiste go through the gate, so the rest of artistes can feel like another will be able to go through the gate. Nobody nah reach out to youth certain way and push them to another level, so we find that everybody just rather deal with dem own thing. I was one of the first to step out and do that when them lock the studio gate pon me; me just go buy two studio equipment and do my thing and it work out. But no matter if is that we doing, we still need support from an organised, fair board to acknowledge artistes and their body of work that is worth paying attention to.”

He praised Koffee’s team, “for helping her to make it on the stage to collect a Grammy”, noting that once artistes secure individuals who are committed to their careers there is a better chance for the genres to make an impact.

Since emerging on the dancehall scene in 2017 with the hit single, Tuff, the Montego Bay-raised artiste, whose given name is Matthew Smith, has established the Rygin Trap Records label. The Therapy album which focuses on his recovery journey following a near-fatal shooting incident in 2020, was also released under the label.

Only 10 minutes into Rygin King’s album, listeners will recognise that it was recorded with the aim of sharing more of himself. It has no collaborations, but the deejay said that he was “open to working with fellow artistes for remixes and totally new tracks”.

“If somebody did tek a picture with me 18 months ago the story wouldn’t be what it is today. I had to keep myself focused and my eyes on the prize, to come forward with something that would be beneficial to dancehall, the listeners and to me. I never want them to say me in a situation and depressed. It’s bigger than that. People need therapy to help with them mental and get clarity. I’ve been busy, nuh true I have a disability at the moment, and I’ve learnt a lot on the production side of the business …me all play two keys pon the piano now and again,” he shared.

In one of the tracks, titled Broken, the deejay ponders on his career choices, and if he would have ended up dealing with present challenges if “[him] neva tek up the artiste thing”.

“It’s one of my favourite songs on the album. That feeling normal for anybody who experience this, because me wonder if me never take up music, in the spotlight, if me woulda alright and if certain things woulda reach me and people wouldn’t bad mind me or look at me in certain, negative way,” Rygin King said.

In closing, he stated, “At the end of the day me a di first one give myself the strength and show I can do whatever I put my mind to. Then, people give me the strength and the work a continue. I hope my music helps other persons out there whether dealing with disabilities or otherwise.”