To be honoured at Sterling Gospel Music Awards 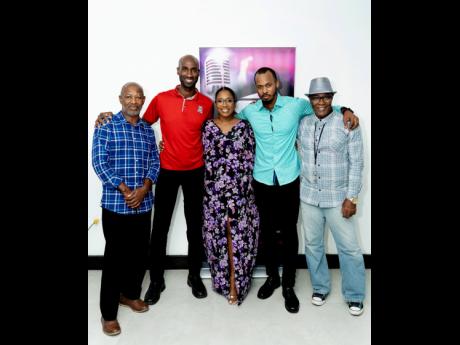 When foundation gospel singer and musician, Sam Wisdom, was told that he was selected for special honour at this year’s Sterling Gospel Music Awards, he admitted that his first feeling was “a little annoyance”. And that stemmed from the fact that he believes that too often the people who have toiled to build the foundation are overlooked.

But, that feeling changed dramatically when he heard the names of the veterans and outstanding contributors to the development of the music, who will be recognised at the awards show on October 8. In addition to Wisdom, Patrick Kitson, Othneil Lewis, Paul Barclay, Delroy ‘Dellie’ Thomas, Jon Williams, Rohan Reid, Noel Willis, Karl Gibson and Rhon Matthison will receive the Excellence in Musicianship award.

“I was excited about Patrick Kitson from the group Change. Patrick is a quiet star,” Wisdom commended. “These guys who you see now with their pants below their waist ... somebody must have laid some kind of foundation for them. I am honoured to be receiving this award.”

It was more than four decades ago that childhood friends Sam Wisdom and George Scott, then students at The Mico College in Kingston, formed the group LOVE Singers, and blazed a trail which would see them using reggae, Country and Western, R&B and hip hop to flavour their gospel favourites.

“From we were teenagers, George [Scott] and I decided that we were going to form a group. At Mico, we advertised for singers and got 30 people, so we had a chorale for about three years,” Wisdom shared.

When it proved too challenging, for various reasons, to maintain such a large group, it was mainly out of that chorale that the 10-member band and singing aggregation called LOVE, an acronym for Let Our Voices Echo/Evangelise was formed. The group took their gospel message across “every nook and cranny” of Jamaica, into the Cayman Islands and Canada. Wisdom also hosted a programme on the then JBC television titled Music Corner.

Through his work with the LOVE Singers, Wisdom, the country boy who was born in the cane piece in Trelawny and grew up in the banana walks of St Mary, would become one of the pioneers of reggae gospel. And, he noted ruefully that he unearthed a cassette of a very early interview that he did in Cayman in which he declared that he would never sing reggae.

“I can’t believe that I actually said that,” he said with a laugh. “So, now, when I look at these youngsters and hear the music, I have to reflect on myself because there was a point when I never thought that reggae music would come out of my mouth. But, I’m glad that we persevered and took the insults. The truth is that the Bible has not addressed style or form musically. It simply says praise the Lord with Psalms, hymns and spiritual songs,” Wisdom declared.

He has a trove of stories of his travels regarding the cultural roadblocks which the group had to navigate in their proselyting efforts. From being told that they couldn’t sing on the pulpit without ties for the men and hats for the ladies, to not calling the name Jesus in their songs.

“When in Rome you do as the Romans do ... sometimes with a twist. So we went around the church and borrowed ties and hats and returned them when we were finished singing. As for the Jesus name, we were with a Youth for Christ group in the States and were performing at a school. So we had to rewrite the songs and put in the word God, because that was acceptable. But at the end of our performance, we announced that we would be performing in the square and of course, we could say the name Jesus all we wanted,” Wisdom recalled.

Wisdom shared that he is “not really a jacket and tie person” and related another of his anecdotes about going to church in the US and realising that everybody, except the pastor, was casually dressed “in slacks” which prompted him to remove some of his own excess clothing.

So, will he be joining the below-the-waist, tight pants and the long strap shoulder bag favoured by the new age gospel elite when he collects his Sterling Gospel Award on October 8?

“The tight pants and bag isn’t for me either ... but it also cannot be about those things. When you are convicted, you will know what to do,” he stated.

Over the decades, the LOVE Singers released three albums, The Rock, King Jesus and H old on, with the latter receiving Best Album from the JAMI Awards.

“Our last performance as a group was three years ago... and just this week I got a call from somebody asking if we are available. But I don’t know ...where God leads we will follow,” Wisdom said.

This year’s sixth staging of the Sterling Gospel Music Awards will incorporate Jamaica’s 60th Diamond Jubilee celebrations by focusing on excellence in the gospel music industry over the past 60 years.