Leonie Forbes was ‘at all times excellent’ 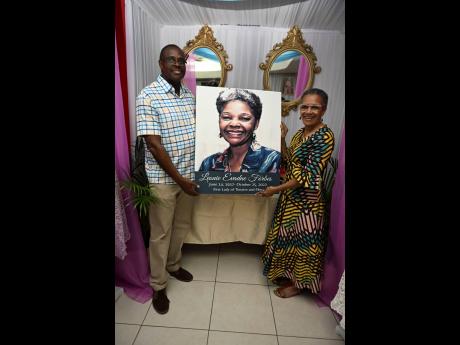 Ricardo Makyn
Director and playwright Basil Dawkins (left), and veteran broadcaster Fae Ellington, who both served as organisers of Monday’s cultural tribute to the late Leonie Forbes pose with a portrait of the actress and broadcaster that was set up at the Little Theatre. 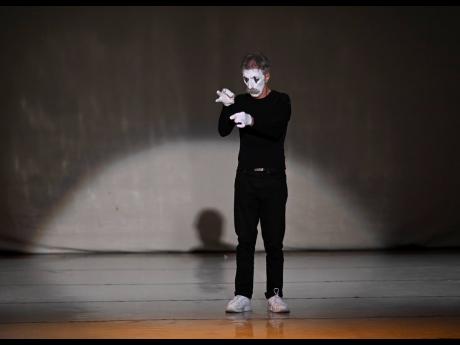 Ricardo Makyn
Pierre Lemaire, former dean of the School of Drama at the Edna Manley College of the Visual and Performing Arts and president of the Board of the Alliance Française de la Jamaique, paid tribute to Forbes in the form of a moving mime. 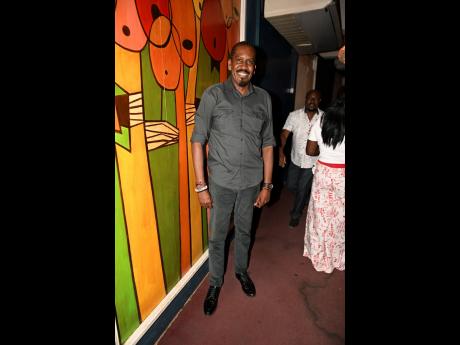 Ricardo Makyn
Actor Michael Nicholson shared that it was extremely moving to watch the performances on Monday evening. He directed Forbes in the play ‘Country Duppy’. Photos by Ricardo Makyn/Multimedia Photo Editor 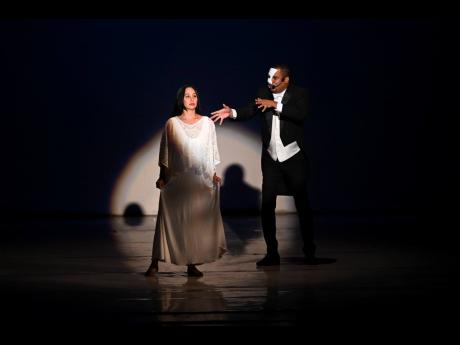 Ricardo Makyn
Rory Baugh (right) gave a powerful performance of 'Music of the Night' from 'Phantom of the Opera'. The dramatic presentation closed Act One of Two dedicated to honouring Leonie Forbes’ memory.
1
2
3
4

Noted director and playwright Basil Dawkins is hoping to make the celebration of late actress, broadcaster and producer, Leonie Forbes, an annual event.

Dawkins spoke with The Gleaner at the Leonie Forbes Cultural Tribute, held at the Little Theatre on Monday, which saw members of the Jamaican cultural community coming together to honour and pay tribute to the life and work of the late doyenne. The adoration and appreciation of all of Forbes’ contribution in spaces of broadcast, theatre and more could not be missed. The Little Theatre came alive with song, dance, instrumental and poetry performances, each with a whisper of her guidance in these areas. Though there was a slight air of melancholy, it was still clear that everyone was happy to have experienced her in some way.

For Dawkins, a member of the organising committee, they achieved the objective they had set out, which was just to come together and honour Forbes’ excellence.

“The idea of the tribute evening was to celebrate Leonie’s existence among us and to recognise her natural ability to be at all times excellent. So, it was to come up with a cultural concert that would display excellence in celebration of Leonie. Generally speaking, we think that, by large, the objective was met and maybe not just by what we see, but based on the feedback we have been getting, we are pretty sure we hit the mark with the variety and quality of items. The fact that all the contributors aimed to provide excellent pieces, we are grateful because everybody worked voluntarily, so it was more of a contribution from the heart. We were quite pleased,” he told The Gleaner.

Elaine Wint emceed the show, and at all times she maintained a tone of reflection and adoration that helped to guide the proceedings. The show took place in two acts. During Act One, there were soulful spoken work tributes from Fae Ellington, Fabian Thomas, Tony Patel, Alwyn Scott, Grace Mcghie and Ruth Ho Shing. The belting out of Unforgettable, performed by Keisha Patterson, turned what is usually thought of as an ordinary love song into a powerful recollection of how Forbes had made an impression. Rory Baugh delivered an intense rendition of Music of the Night from Phantom of the Opera and brought Act One to an end.

Act Two saw a performance from Karen Harriott and Deon Silvera that lightened the atmosphere with laughter. Young Ngozi Wright also delivered a strong performance of a dub poem titled Letter to Leonie. During this act, Minister of Entertainment, Gender and Sport Olivia Babsy Grange, paid homage to the iconic actress and pioneer broadcaster. Dean Frazer gave an immaculate saxophone cover of Imagine by John Lennon, and Ashe closed the show with a medley that crowned Forbes as royalty.

It was hard to ignore the warm feeling that permeated the atmosphere as old friends and colleagues shared memories of good times. For Dawkins, he hopes that they can meet up like this without the circumstances being death.

“Unfortunately, we do not do it (come together) as often as we probably should. Invariably, it takes the departure of somebody inside of the community to get everybody on the same page to be doing something like this and even taking time out to celebrate each other. We don’t get an opportunity to. This was important not only because it marked a celebration of Leonie, but really and truly a number of us were coming out and seeing each other after a long time,” he said.

“I am hoping that we could do a Leonie thing that is done annually. It is also an opportunity for [the] new to get to meet old. I am realising that there are so many operatives now that seem not to know each other. I think it is opportunities and occasions like these that will drive the unity and the bonding, and I think it was a good effort on the part of all the persons who came out to mix and match and talk and exchange,” Dawkins continued.

Forbes passed away in October of this year at The University Hospital of the West Indies. She was 85.