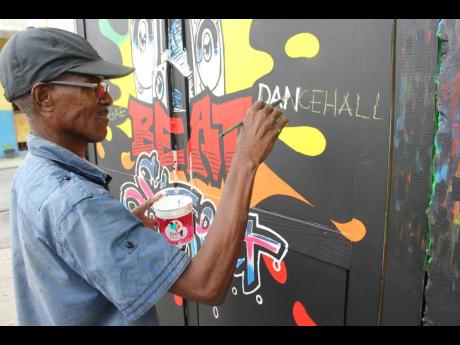 Contributed
Beat Street has the potential to be a real game changer in the efforts to revitalise an area that has been plagued with crime and underdevelopment for decades.

Jamaica has made significant contributions to global popular culture despite its small size. A testimony to this fact is that in 2015, the United Nations Educational, Scientific and Cultural Organization (UNESCO) designated Kingston, the creative nucleus, a creative city of music. Despite this prestigious designation, very little has been achieved in leveraging the city’s potential.

Coming out of World War II in the mid-1940s, Kingston began expressing its identity as a music-driven city with itinerant mento musicians and sheet music entrepreneurs. These included Slim and Sam, Alerth Bedasse and Everard Williams, who operated at the corner of Oxford Street and Spanish Town Road, near the Coronation Market.

Kingston grew into a vibrant city of music with sound systems and dancehall centres in west Kingston, such as Chocomo Lawn, Pioneer Lawn, Forrester’s Hall, King’s Lawn, and Jubilee Tile Garden. In east Kingston, there were hot spots such as Bournemouth Club and Success Club and night clubs like Club Havana, Club Adastra in Rockfort, Glass Bucket in Half-Way Tree, and the Silver Slipper Club in Cross Roads.

Coming into the 1950s and the 1960s, Jamaica became known for a new cultural reality, Rastafari, driven by African consciousness and rooted in teachings of peace, love, music, black awareness, and the use of ganja. Kingston evolved as an iconic musical hub with seven genres of music: mento/calypso and nyabinghi, followed by five genres of popular music that captured world attention: ska in the early 1960s, rocksteady in the mid-1960s, reggae emerging straight from rocksteady, dub arising out of the recording studios and sound system culture, and dancehall music in the late 1970s.

This is unmatched by any other country, but despite this phenomenon, no one saw the potential of a world market waiting to be exploited in the best interest of the marginalised communities of Kingston. A space that gave the world this popular music culture and lifestyle that has swept the world for seven decades is yet to benefit from it. Cultural activists have been advocating for using our music culture to drive an alternative tourism product based on culture for decades. Still, this advocacy has been ignored by successive government administrations and corporate Jamaica.

The Sounds & Pressure Foundation chairman, Julian ‘ Jingles’ Reynolds and his late wife, upon visiting New Orleans in 1996, saw the dynamic similarities between New Orleans and Kingston: size, population, climate, notable crime rate, beautiful natural harbours, strong cultural offerings, but also the considerable dissimilarity: While New Orleans had become a leading tourist attraction in the United States, consistently ranked in the top 10 places to be visited for its music, food, people, culture, Kingston, apart from a Japanese inflow of cultural tourists since the 1980s, remained unknown and unvisited despite its strong music culture around the world.

In 2019, just before the COVID-19 pandemic, New Orleans boasted revenues of US$11 billion, over 10 million visitors, and employed more than 50,000 workers in its cultural tourism industry, firmly rooted in music. Kingston and Jamaica must benefit from our uniqueness and tremendous cultural assets.

Kingston and New Orleans are interconnected culturally; the American city had an enormous influence on the birth of Jamaican music, as it was the rhythm & blues emerging from the American south, primarily New Orleans, that inspired the young Jamaican musicians of the 1940s and ‘50s. But interestingly, in an interview carried in the New York Times eulogising the great New Orleans entertainer Professor Longhair, one of the pioneers of American rhythm & blues, he admitted that he was influenced by a ‘Calypso Joe’, an itinerant street musician who journeyed on the “banana boats” that plied between New Orleans and the Caribbean, to entertain New Orleanians.

The Sounds & Pressure Foundation is working in conjunction with the Tourism Enhancement Fund (TEF), the Jamaica Tourist Board (JTB), the Ministry of Culture, Gender, Entertainment and Sport, the Office of the Mayor of Kingston, and the Urban Development Corporation (UDC), and Kingston Creative, to establish what it describes as The Beat Street Music Heritage Zone. The area from North Parade to North Street and Luke Lane to Love Lane houses over 16 music heritage sites from which the Jamaica music industry evolved, such as Forrester’s Hall, the world’s premier dance hall; Big Yard, the early home of reggae sensation Dennis Brown, and housed over 30 record stores, studios and offices from the 1950s to the present.

Beat Street has the potential to be a real game changer in the efforts to revitalise an area that has been plagued with crime and underdevelopment for decades. This is an opportunity for a creative city initiative and the development of a heritage tourism product in the heart of the city to benefit the residents of these communities.

Julian ‘Jingles’ Reynolds is a novelist, film-maker, social entrepreneur, and journalist, who operates in the United States and Jamaica. Dr Dennis Howard is an ethnomusicologist, educator, media consultant and entrepreneur. Roy Black is a radio host, music collector, and journalist. They co-founded the Sounds & Pressure Foundation, along with six others, in 2005.