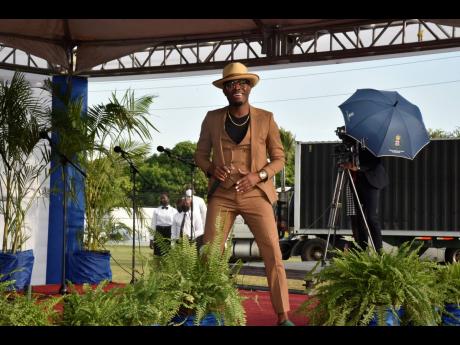 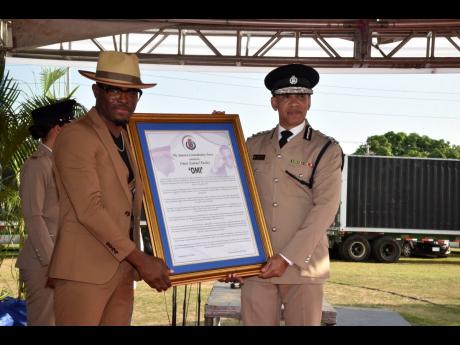 Even as his multiplatinum-selling song, Cheerleader, was still breaking records and he was in the spotlight, reggae singer OMI, quietly found his personal cheerleader, tied the knot, and expanded his family. The notoriously private entertainer welcomed his son in January, and that caused a seismic shift in his entire personal and professional life, causing him to take paternity leave.

“There is nothing that I value more than family because at the end of the day, that is what is truly important. So I took off a year from travelling and everything following the birth of my son in January. That feeling … seeing my son, spending time with him, tops every wonderful feeling I have ever had before,” OMI shared.

The 36-year-old singer and songwriter is clearly thrilled about being a father and could easily talk for hours about his 10-month-old son, who is not yet walking but who already has a “big personality” and “tek after him father”. And that, he said with a laugh, “is a good thing”. Without apology, his views on parenting are traditional, and when it comes to numbers, he is not going for an entire football team.

“I am enjoying fatherhood, and I know only too well that it is a huge responsibility. It takes a lot of cash, attention, and the whole shebang to show that you really care. No, man, I am not going the Nick Canon route,” OMI said with a loud laugh.

He added soberly, “As a parent, you should be the one who is raising your children, not these electronic devices. I prefer to stick to the old-fashioned values. My son is a blessing.”

He had high praises for his own father, Kenroy Pasley, a musician who passed away when OMI was nine years old, but lived long enough to be an inspiration for his son.

“I am the father that my father was. He was a very good example,” he said in tribute.

But whereas OMI was comfortable sharing about his son, he was not so forthcoming about his cheerleader, simply because of the high value he places on his marital privacy. However, he did sing her praises.

“My wife is beautiful … really beautiful .. inside and out. She is a humble, caring person, and we connect on every level. Sharing children with her is wonderful, and it is a huge honour to have her by my side,” he said.

OMI and his wife are business partners in a barber, beauty salon and spa enterprise in St Andrew. He noted that they “made a conscious decision for the business to be independent of OMI the singer”.

“For this year, I have not been idle. It’s just that I didn’t tour. I have been dabbling in real estate, and before that, we launched the business in 2020. Then COVID came soon after, and we had to be closed for the next four months. Now that the world is opening back, things are looking up, and we are committed to making this work,” OMI explained.

And speaking of the world opening up, with his one-year sabbatical drawing to an end, OMI is getting ready to jump back into the saddle musically. He shared that he has a few projects working on and that for 2023, it will be “full speed ahead with the music”.

Last Thursday, OMI, who is a former member of the Jamaica Constabulary Force (JCF), was honoured at the force’s Long Service and Good Conduct Awards Ceremony. He was selected as the first recipient of the Jamaica Constabulary Force Special Award for consummate contribution to the organisation. Among his qualifying marks were having served and exited the organisation honourably; remaining a proud JCF ex-member who speaks well of the organisation and its impact on their personal and professional development; maintaining an upstanding and respected profile within the community, whether they are residing locally or overseas and contributing significantly in their post-JCF career, whether locally or regionally.

“I was a policeman for three years, 10 months, and 13 days, and I treasure those moments. The lessons that I learnt at the university called the JCF have carried me through life, and here I am now being honoured by the force. It is a wonderful feeling,” he said.