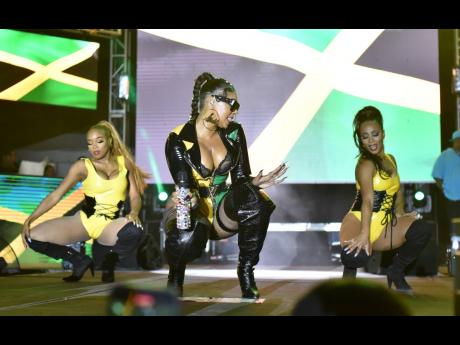 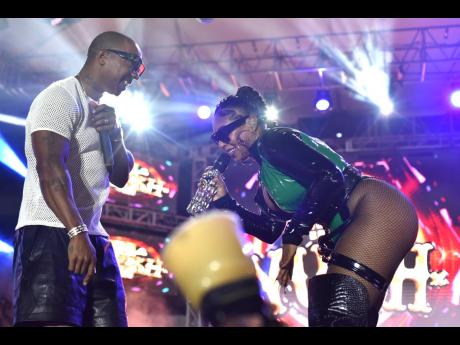 Kenyon Hemans
Ashanti and JaRule performing together at Mega Yush. 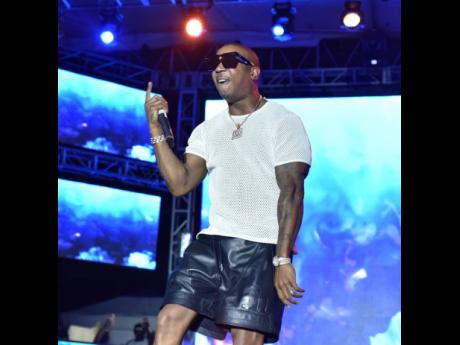 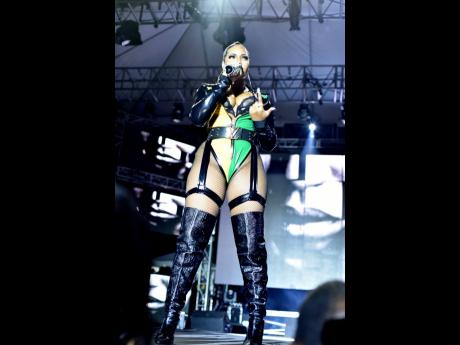 Ashanti and Ja Rule certainly did not disappoint the hundreds of patrons who poured into the Sabina Park venue for Mega YUSH held Saturday night. Giving an hourlong performance of some of their greatest hits, the dynamic duo worked the stage and ensured that lovers of music from the early ‘90s to 2000s received bang for their buck.

While bartenders served up Wray and Nephew drink mixes, lovers rocked to a slew of oldies hits, as others swapped heels for flats, and friends laughed and danced to the selections from Richie Feelings, Coppershot and Kurt Riley. It was clear that the popular DJs had a vast catalogue of music ready to satisfy YUSH’s brand of “no long talking”, just musical vibes. But even as eventgoers soaked up feelings of nostalgia, it was obvious that many were waiting in high anticipation for Ashanti and Ja Rule to hit the stage.

When the lights dimmed, signalling the beginning of their performance, simultaneously phone cameras went up and the audience cheered, welcoming them on. By the time the opening notes for the track Mesmerise was heard, the screams erupted even louder. When the pair walked on to the stage, the audience sang the tune word-for-word along with them; and if that moment was all they had Saturday, it would be safe to say it was worth the ticket purchase. But there was much more; as Ashanti and Ja Rule alternated time on the stage, they gave the crowd a full package. Ashanti, along with her backup dancers, used the entire stage to ensure partygoers would not be disappointed. She showed off her vocal ability on her tracks such as Into You, What’s Luv, Rain On Me and The Way That I Love You.

Ja Rule, who said that he was happy to be back performing in Jamaica after having been banned for 10 years for profanity while performing his tune I’m Real, also delivered a strong set. His distinct voice filled the venue as he rapped the lyrics to hit songs Where Would I Be, New York, B aby Say Yeah and Between Me and You.

When the two finished performing minutes to three, the crowd concluded in certainty that the first staging of Mega YUSH was well executed. Patron Damielle Samuels, who came all the way from Trelawny to enjoy the show, shared with The Gleaner after their performance that she was happy she did not miss the show.

“It was definitely Ja Rule and Ashanti why I came out tonight. It was money well spent, and the food was wonderful and the bar was great; it was really a good night. The access to the venue was easy and this was my first YUSH, but I will definitely be back. It was a great experience and I really had fun,” she said.

Sharing the same sentiment, Director for Voices of Jamaica Today Foundation, Andre P Blackwood, said he came in all the way from Aruba for the show.

“I cut my vacation short. I bought my VIP tickets early because I needed to be here to see it. It has been great. Mi enjoy it. Seeing Ashanti was definitely a highlight. It was the right vibe,” he shared.

Event organiser Scott Dunn, while speaking with The Gleaner, shared that selecting Ashanti and Ja Rule to perform for the launch of Mega YUSH, which is a new instalment of the YSH party series, was the perfect decision and based on the turnout and vibes on Saturday night it was successful

“For the first Mega staging of YUSH, we wanted two mega artistes with iconic hits that we knew would deliver stellar performances. Ja Rule and Ashanti were obvious choices with Billboard-topping songs and Grammy Awards behind their names. There were no concerns [ahead of the event] per se, but there is always a determination to deliver a world-class experience. But with the YUSH team, we were confident that we would exceed all expectations,” Dunn said.

The party continued even after Ashanti and Ja Rule left the stage, as the disc jocks continueds to spin tunes from back then and now. When it ended around four in the morning, patrons left the event satisfied that it was money well spent.