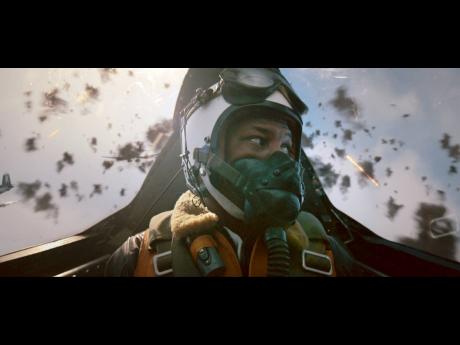 AP
This image released by Sony Pictures shows Jonathan Majors in a scene from ‘Devotion’.

The year is 1950. Jesse Brown is only 24 years old, and he’s the first black aviator in the United States Navy. As impressive as that is, it’s only the beginning of his tremendous story. Thankfully, in 2022, that story gets to be told, with one of the most impressive actors in recent years playing him. Acting alongside frequent flyer Glen Powell, fresh off his stint as the heel with a heart of gold in Top Gun: Maverick, Jonathan Majors plays the lead role with heart, despite being slightly miscast.

While I did not know Jesse Brown myself, Majors is about 10 years his senior and it shows. He’s not the first to portray a figure who is years younger, but he brings a different atmosphere to the film’s story. There’s a sense that the person you’re watching has been through much more than he ought to have at such a young age. It might not fit for his age, but the glaring chip on his shoulder does comes in handy when the film delves into Brown’s character.

Majors plays Brown as a proud man, intent on making his own way in the world, entirely on his terms. His friendship with Powell’s Tom Hudner anchors the movie, and presents a realistic and difficult relationship. Being a well-meaning white man in 1950, Tom is quick to defend his wingman any day, but is checked regularly by Brown’s refusal to be saved by anyone.

Many films that feature the struggles of segregation fall short thanks to the insistence on the white saviour trope. Thankfully, Devotion sidesteps this pitfall and gives Jesse Brown a voice of his own. Several scenes feature him navigating the various scenarios in which the colour of his skin is put on trial, with some being more subtly handled than others. As over-the-top as they might be the film gives Brown agency over these moments, calling the shots as he sees fit.

That also extends to the film’s gripping dogfights. It’s more of a character study than an action film, but it’s adept at demonstrating the sheer danger of piloting a metal canister into heavy artillery fire. Many times you fear for the pilots’ lives in a way that you don’t often see in your more adventurous war films. Devotion understands the weight of mortality, especially to those who readily submit to it.

Old as he may be, Majors is an undeniable professional who brings out the pain and pride for the pilot he portrays. Glen Powell is giving his all as the earnest and emotional brother in arms. A few pacing issues cause the movie to drag ever so slightly, but the slow and steady approach gives the two stars a chance to stretch their characters to the fullest. Devotion might have worked better as a television series than a film, but the result is one that’s remarkably contemplative, sticking with you as you leave the cinema.