Dub poet’s daughter has ‘Plain and Simple’ message of empowerment 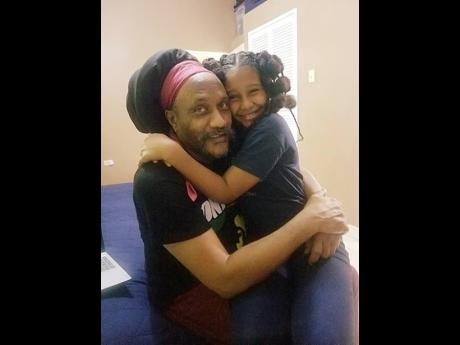 Ten-year-old Mikaya Sinclair never imagined being credited on any of her father’s albums as an artiste or songwriter but is currently relishing her abilities with the release of Golden Spoon Maroon.

Affectionately called ‘Mik’, she is featured on the track titled Plain and Simple, which, she shared, was originally the idea of her father, veteran dub poet Yasus Afari, but that she decided she wanted to be a part of.

“Writing is not something I really do often,” Mik told The Gleaner, adding that she would pen or have certain ideas in her head from time to time, “so when he shared it with me, we agreed we could do it together”.

The album puts poetry and dub in the forefront and has been promoted as a means to be used as an instrument to reset and recalibrate, and it also fuses elements of roots reggae, which Mik anticipates will make an impact across a wide age group. She specified that she wants Plain and Simple to reach the ears of little girls like her, and urges the older generation to share with the children.

“I feel good about the production. And I hope it is a good impact, especially for little girls like me – it is just letting little girls know that they should respect themselves and stand up for themselves,” Mik said.

The young talent is looking forward to high school, but said that she is uncertain what career path she plans to take.

She said, “I only hope I’m doing good in the things I’m doing right now.”

Yasus Afari described Mik as “a peculiar child”. The youngest of his three daughters, he said she “has her strong opinions, but she is very respectful and obedient”.

“We value her as a human being as well as a lovely daughter, so her opinions and choices count. So, if she chooses a career in the arts specifically in music, we will support her as if it was another career, whether in medicine or education or whichever discipline.”

He shared that Mik not only chose the harmonies, but decided on the final mix for the track.

“When the song was recorded, I was thinking on how to connect with the younger generation, and this was natural because she is part of my creative process,” Yasus said.