Champs on a limb 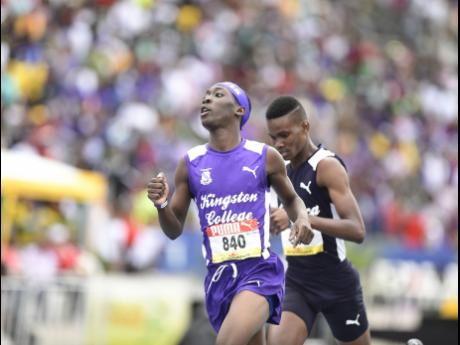 Not for the first time, the ISSA/GraceKennedy Boys’ and Girls’ Athletics Championships is in jeopardy of not being held. As COVID-19 continues to wreak havoc and vaccination drives struggle to keep up, there is no definite date for the restart of sport and without guarantees for its approval, the spend on something that isn’t a sure thing may just be too much.

Now or never for Champs

PRESIDENT OF the Inter-Secondary Schools Sports Association (ISSA), Keith Wellington, has warned that it is now or never for the ISSA/GraceKennedy Boys and Girls’ Athletics Championships, while casting doubt on the possibility of any high-school sporting events being staged this year.

With just over two weeks to go before the scheduled start of the April 27-May 1 championships, Wellington indicated that they will likely be forced to cancel the event for the second straight year, if government approval for the event is not secured within the next 48 hours.

The St Elizabeth Technical High School principal also had little optimism around the possibility of other ISSA sporting events taking place in 2021.

“Right now, it is unlikely that we will be able to have any competition. Even Champs itself now is in question because if we are not able to get some go-ahead within the next 24 to 48 hours, we have to make a decision, let’s put it that way,” Wellington said.

Over a three-week period (February 27 to March 20), 20 local track and field meets were held for both juniors and senior athletes.

These events were used as qualifying meets for both Champs and the World Athletics Under-20 Championships, which is scheduled for Nairobi, Kenya, this year.

However, the season has been marred by cancellations, with events such as the Milo Western Relays, Gibson Relays, Digicel Grand Prix and, most recently, three of four regional high-school championships all not facing the starter.

Recent heightened COVID-19 safety measures, such as weekend lockdowns, triggered by a spike in cases islandwide, brought a halt to the local competitions and has left organisers, sponsors, coaches, athletes, parents and fans all scratching their heads.

Last month, Wellington expressed optimism about having table tennis and cricket competitions, which he described as low-risk events. However, he admitted that these will not be possible this year.

“The mere fact that we are now almost halfway through April and no sport is currently being allowed, it would be difficult to get competitions played and completed before exams. On that basis, it would be challenging to see cricket or any other sport being played this year,” Wellington said. “The fact is that once there is any level of uncertainty, the planning is always difficult.

“We are thankful that at least the process of vaccination has started. However, we are still uncertain as to how many vaccines are available and how many people will be vaccinated by now and summer. With that level of uncertainty, we are still not sure what we will be able to do come September. We are hopeful that in another three or four months we will have a level of vaccination that will allow some confidence from the Government to have some semblance of normality,” Wellington added.