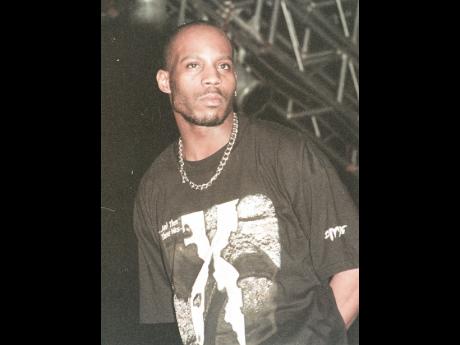 DMX’s trademark bark, along with those husky, guttural rhymes are as unmistakable as they are unforgettable. The great, but troubled rapper, passed away just last week, sending memories of his link to Jamaica cascading along with the tears shed for the loss of another larger-than-life artiste. Those memories of DMX’s visit to Jamaica will not soon be forgotten. He conquered Sting in one day, and extended his three-day trip to two weeks. The spirits of DMX and those of the island meshed and have never parted.

When DMX performed at Sting

IT WAS in the year 2000 when rapper DMX landed in Jamaica to represent at the ‘greatest one-night dancehall show on earth’ – Supreme Promotions’ annual must-attend event, Sting, and had such a great time that he stayed longer than his scheduled three days.

“DMX gave a great performance. In fact, I would say that of all the overseas acts that Sting brought through the years, DMX was the best. He rocked the crowd, and it was a very big crowd too,” Heavy D, one of the key persons in Supreme Promotions back then, told The Gleaner.

“He was excited about Jamaica in general; the food, the people, the vibe. I don’t remember exactly how long he was in Jamaica for, but he didn’t leave right after the show. I am really sorry to hear [what’s] happening with him. That drugs thing, once yuh get hooked a bare problem,” he said.

Writer and music industry expert Dave Rodney worked with Angelo Ellerbee’s Double XXposure Media Relations at that time, and he recalls DMX very well. “I had a front-row seat to a lot of happenings in the music industry, and one thing I can say is that DMX is an extraordinary talent. At Double Xxposure, as well as DMX, there were artistes such as Mary J, Shabba Ranks, Patra and Kulcha Don,” Rodney said.

He said DMX wanted to visit because he had heard about both Jamaica and Sting, and once he came to Jamaica, he just stayed. And, while that action threw his and others’ schedules helter-skelter, there was a certain Fifth Ave designer who, Rodney said, “was about to have kittens” when the rapper didn’t return home to the US as planned.

“It is the norm for designers to lend A-list entertainers jewellery to wear on stage, and when DMX decided to stay in Jamaica, he had in his possession nearly a half a million dollars’ worth of jewellery from a Fifth Avenue designer. He was to go for two or three days but, instead, stayed up in some hills for two weeks. She is a Far East designer and didn’t really understand black culture then. But all’s well that ends well, and everything was returned when he got back to the US,” Rodney related, now being able to laugh at the memory.

According to Rodney, though talented, DMX has been notoriously unreliable, and that posed a challenge when making media

arrangements on his behalf. “X was the first to shift multi-platinum albums, topping the charts, while having a book and film deal at the same time. He was the only artiste who could have MTV, VH1 and BET all waiting on him for days. He will be booked for a 3 p.m. interview with camera crews, and he don’t show up until eight. But when he comes, you are guaranteed a great interview that was well worth the wait,” Rodney explained.

The Ruff Ryders legend, whose birth name is Earl Simmons, suffered a heart attack after a reported overdose last week. DMX was admitted to a New York hospital on Friday and has been on life support since. The 50-year-old rapper has struggled with substance abuse over the years, including in 2019 when he cancelled shows to go to a rehabilitation facility. He has been to rehab several times.

TMZ reports that the rap legend underwent tests on Wednesday to determine how much brain damage had been done during the 30 minutes he was without oxygen, following a reported drug overdose and subsequent heart attack last week.

The results of the tests arrived on Thursday and reportedly showed DMX hasn’t regained any brain function over the last six days.

Manager Steve Rifkind previously stated that “the family would determine what’s best from there”.

DMX, a three-time Grammy-nominated artiste, made his rap début in 1998 and has released seven albums. His first studio album, It’s Dark and Hell is Hot, debuted at No. 1 on the Billboard 200 Chart. The multi-platinum-selling album had several hits, including Ruff Ryders’ Anthem, Get At Me Dog and Stop Being Greedy. He also acted in several movies.