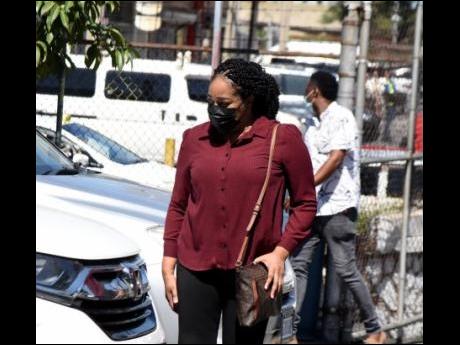 Kenyon Hermans/Photographer
Former manager of NCB, Andrea Gordon, arriving at the Kingston and St Andrew Parish Court to answer to charges of larceny on Thursday. She pleaded guilty to embezzling tens of millions of dollars.

The case of former senior manager at the National Commercial Bank, Andrea Gordon, was big news when it broke in June of 2020. The 52-year-old made headlines again during her trial when she admitted her guilt and the court heard details of the way she broke down in front of internal investigators.

'BACK AGAINST THE WALL'

THE FORMER senior manager at the National Commercial Bank (NCB), who on Thursday admitted to swindling the company out of $34 million, broke down in tears last June when she was confronted by the bank's internal investigator, claiming that her “back was against the wall”.

The Home Circuit Court heard that when the 52-year-old offender was questioned about the illegal transactions in her office at the bank's Operation Centre at Trafalgar Road in New Kingston, she immediately pushed her laptop away, laid her head on the desk, and started crying, “It is really bad, it is really bad.”

The mother of three told investigators that she started stealing from the bank in 2017 to help a cousin who had cancer and after she ran into financial difficulties while renovating her house.

However, the court heard that Gordon had initially tried to lie her way out of the fraud, claiming that the money she had transferred to her accounts from the bank's system had been from other banks' cheques, which she had manipulated the system to show.

The ex-manager, who had been employed to the company for 30 years and at the time of her arrest was earning $11.1 million annually, appeared shamefaced on Thursday as she stood in the dock listening to the allegations while holding her head down at times, and at other instances, shaking her head in disagreement.

Gordon, who started out at the bank as a special cashier in 1989, then pleaded guilty to three counts of larceny as a servant, three counts of access with intent to commit an offence, and seven counts of engaging in a transaction that involves criminal property before Justice Lorna Shelly-Williams and was remanded for sentencing on May 31.

According to the facts outlined in court by senior prosecutor Andrea Martin-Swaby, Gordon posted 282 transactions, totalling approximately $111.3 million, in which funds from the bank's accounts were transferred to her accounts and relatives, including her children and spouse, as well as the accounts of familiar customers based on the findings of the bank's investigation.

Swaby, however, informed the court that the transactions that are covered in the indictment amounted to $34 million.

Gordon was able to access the bank's system via a unique code that she was given in her capacity as manager, which enabled her to conduct transactions on her own, the court heard.

From the millions that Gordon had accessed, a total of $24.5 million was transferred to the account of Construction Company between February 2017 and April 2018 and a further $7. 2 million to the owner's account in April 2018.

The court further heard that the owner of the company, who had previously met Gordon while she was fixing her Three Oaks house in Kingston was contacted in 2017 by Gordon, who told him that she had bought a house in Havendale and wanted a contractor to effect repairs.

after recommending a contractor, agreed with Gordon for her to send the money to his business account to cover the cost for goods and services.

The witness, who said he was shocked when Gordon was arrested, further disclosed that he had maintained records of all the cheques that were drawn against the account as well as the receipts for the goods and services, which Gordon would inspect periodically.

The court heard that the cheques drawn – totalling $8.9 million – were paid out to two of Gordon's children, her spouse, and a co-worker.

Following Gordon's guilty plea, her lawyer, Vincent Wellesley, begged the judge to admit her to bail for her to “prepare for the inevitable”.

Wellesley told the judge that his client, who, from the inception, owned up to her wrongs, had not sought to flee the jurisdiction and had turned up to court on each occasion when the matter was mentioned.

But before making the application, the attorney registered his displeasure at the Crown's disclosure of the total amount of money that the bank has lost from Gordon's illegal transactions.

He accused the Crown of trying to prejudice the judge's mind but was assured by Justice Shelly Williams that she would only be dealing with what was on the indictment and “nothing else”.

Following that, the judge requested a social enquiry report.

Also, before the matter ended, an attorney-at-law, Candice Williams, from the Financial Investigations Division, indicated that the division would be pursuing a forfeiture order against Gordon under the Proceeds of Crime Act.

The fraud case against Gordon was transferred on Thursday morning from the Kingston and St Andrew Parish Court to the high court after Director of Public Prosecutions Paula Llewellyn entered a nolle prosequi to end the matter in a lower court and move it to the Supreme Court on a voluntary bill of indictment.

However, Gordon's son, Odain Ffrench, and her spouse, Lloyd Ffrench, who are both facing fraud-related charges in connection with the multimillion-dollar fraud, had their bail extended on Thursday in the parish court for them to return on June 24.