Reverence for Queen and country on display 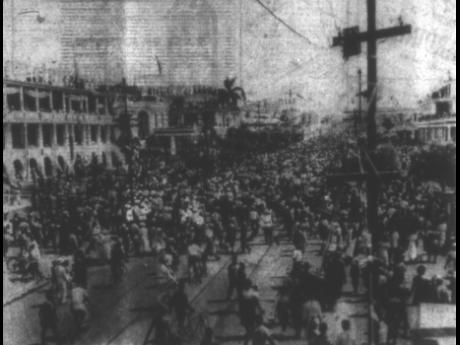 File
King Street after the big parade on June 11, 1953, in honour of the birthday of Her Majesty THE Queen presented a scene of thousands as the large crowd which watched the March Past from the Square dispersed.

There is a certain reverence for the Queen in Jamaica, though diminished over time. But in 1953, nine years before independence, that reverence was there in all its glory. Crowds like never before seen turned up to witness Jamaica’s salute to the Queen and The Gleaner was there for all the pomp and pageantry.

CROWDS THAT DEFIED estimation turned out on June 11, 1953, to witness Jamaica’s salute to a Queen. His Excellency the Governor, Sir Hugh Foot, stood taking the salute for one hour and ten minutes on the saluting base at King Street, while Her Majesty the Queen’s Birthday Parade went by - a parade of over 6,000 military and civilians in a march past that made history.

King Street flanked by the public buildings, has never been so gay, or alive. But it was no light gaiety. Against the backdrop of Coronation dressings, a crowd of nearly 10,000 packed the behind the police cordon, the two floors and the roof of the public buildings and the balconies of the building north of the square.

The main parade of the Military left Up Park Camp through the cotton tree gat at 8 a.m. Along with the Army detachments were the Jamaica Constabulary, the Jamaica Police Island  Reserve,  the Jamaica Cadet Force, the Boys Scout Association, the St. John Ambulance Brigade, the Boys Brigade.

Thousands watched the parade pass along Caledonia Avenue, Maurescaux Road, East Race Course, East Queen Street, South Parade, then into King Street for the high spot of the parade – the march past.

Behind the marching troops went another column through the cotton tree gate. This was the mechanized parade of military vehicles and weapons. They left to a timed departure at 8.30 o'clock half an hour after the marching troops led the way out for their column.

While the military was forming up on the grounds at Up Park Camp for the march a third column consisting of representatives in groups of over 50 from some 70 friendly societies were forming up at the Kingston Race Course; they left at about 8.45 a.m. to keep with the schedule. Taking a route down upper King Street from the Kingston Race Course they were timed to fall in behind the other columns on leaving Victoria Park.

Both routes were lined with large gatherings of people out to see the parade Old people, holding, holding to their memories of past parades, willingly conceding that they had never seen anything like this before youngster like the thrill of it. Mothers held up their little children who will remember when they are old enough to look back.

Down at King Street at that saluting base, a great crowd waited as the Parish Church clock ticked off the minutes.

His Excellency moved towards the saluting base, as the parade came down the street. People craned their Becks; the police lines stiffened.

Then the crowds in the square caught the cheers that had been echoing in the distance. An open Jeep bearing a saluting staff of fleer came down King Street. The march past was on.

Another open Jeep followed bearing Brigadier Cosby Jackson, Commander Caribbean Area. He passed by standing and saluting. Further down his jeep stopped for him to walk back to the saluting base.

Then the parade went by as His Excellency in his blue dress uniform plumed hat and ceremonial sword took the salute.

The Pioneers of the Royal Welch Fusiliers with Billy, the goat, the mascot of the regiment, came in for their share of the cheers. Then the smart-stepping columns of the rest of the regiment went by to the tune of their regimental march.

There were resounding cheers from the crowd all along and the crowds in King Street joined in as the Jamaica Battalion gave the salute.

The other military detachments seen on parade only on very special occasions were just as colourful and precise as they marched past the saluting base - the Royal Army Service Corps, the Royal Army Ordnance Corps, the Women Royal Army Corps. The Women in the crowd had a special cheer for “their own”.

A short lull in the parade, then a mounted horseman, Lieut-Colonel M. R deCordova, Commandant of the Jamaica Cadet Force, led the columns of bereted youngsters and their officers.

Then came Major “Bobby” Jones, with his spirited march leading the Jamaica Military Band in their zouave uniforms; followed by the band and drums of the Jamaica Battalion and the band of the Jamaica Cadet Force.

The Police detachment went by in the aura of colour which comes from a massed formation of their uniforms. The Special Constabulary, the St, Johns Ambulance Brigade followed. The nurses of the St Brigade in their white uniforms got their own crescendo of applause, then the Boys Brigade.

Wearing civvies, but still showing that they could march in step, were the detachment of the Jamaica Legion with their hats off in salute.

While marching feet echoed down the street the crowds strained their eyes skyward to witness the fly-past of the Jamaica Flying Club. In two waves six planes flew overhead in review order. His Excellency turned his eyes and saluted skywards too – as the planes passed out of sight over the sea.

The Jamaica Military Band returned to a position across the street from the saluting base. Then King Street became a sea of uniforms as the Boys Scouts streamed down with their leaders. The Jamaica Constabulary’s Band came in between the columns just when the beats of the other drums that went by before were dying out in the distance.

More scouts and yet more scouts and as the scouts went by the saluting base the crowds, so many of them parents, behaved like fathers and mothers everywhere at the sight of a smart group of youngsters. They cheered and cheered.

There was a flash-back to the old days in the column of horse-drawn vehicles of the Royal Engineers. The horses stepped proudly as if they felt that even in this age they could still hold their own.

As they passed from the scene the memory of their age also left with them the mechanized columns of the modern army rumbled down the street scores of troop-carrying trucks, Bren fan carriers, antitank guns,  Jeeps to top it all, a few civilians ever see a mobile, repair shop with Bren gun carrier being towed on a wrecker. The parade of the mechanized column numbered nearly a hundred.

Then came the march past of over 70 organizations and friendly societies, with variegated names, uniforms, banners, dress, steps, salutes. But all in one spirit which the thousands looking on found pleasing.

As the sound of drums, bugles and marching feet faded in the distance, the crowds surged forward in a spontaneous demonstration and the police had their anxious moments. Police motorcycles blocked King Street above Barry Street to keep the way open so that His Excellency could depart.

But that was all. Many people who had never seen His Excellency In his full-dress uniform surged forward for a closer look. There was no disorder. The surrounding streets choked themselves to empty the saluting areas of vehicles and pedestrians. From their dispersal points in the city’s west end, the military and civilians marchers left for home.