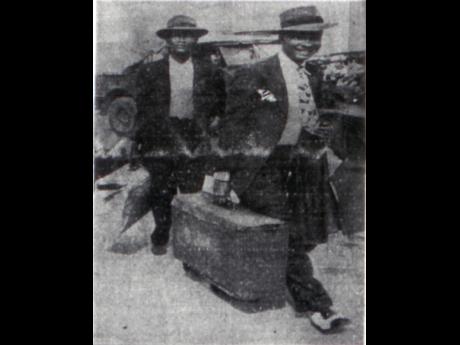 File
Two of the hundreds of Jamaicans who are leaving on the “Empire Windrush”, on May 27, 1948 for England in search of employment. They are on their way to board the ship at the Royal Mail Lines pier. 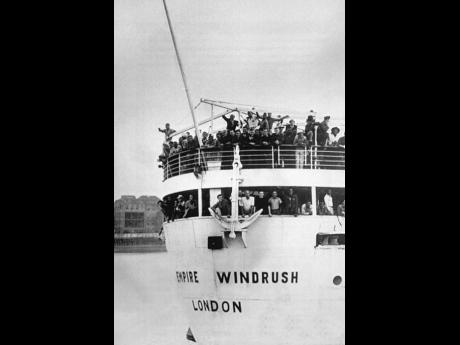 There have been hundreds of stories over the years about Jamaicans who made their way to England on the “Empire Windrush”. The generation has taken on the moniker ‘Windrush’, named after the ship that took them to a brand new future. For some, the three-week journey would lead to untold hardships, while for others, it represented economic upliftment, not possible otherwise. Whatever the case for those individuals, as a whole, the Windrush generation, changed the landscape of England forever.

900 Leaving by Windrush This Morning

One of the largest batches of passengers to leave Jamaica in peacetime will sail from the Island this morning, when the troopship “Empire Windrush” leaves port on a long voyage home to England, taking the huge total of 900 passengers from Kingston.

A cross-section of Jamaica’s citizens – musicians, boxers, craftsman, clerks and the rest going to England in search of work, as well as professional persons going on holiday, make up the big passenger list. Added to it Jamaican RAF and other military personnel returning from leave and duty.

During its three days in port, the “Windrush” became easily the most popular ship that has docked in Kingston Harbour for a long time; and all day yesterday the Royal Mail wharf, where the vessel lay alongside, was a scene of activity and animation as dialling preparations proceeded.

Friends and relative crowded the pier to see the passengers off, while outside in Port Royal Street and down at the seaside vantage point of Duke Street throngs gathered to bid farewell to departees.

With as many 430 troop deckers and 160 cabin passengers embarking here, the wharf scene was indeed a busy one, but the ship’s officers ably assisted by the military, the police and the Customers, kept things in check and everything went smoothly. There were also 300 in transit passengers to add to the full big ship’s complement.

Going by way of Tampico, Mexico and Bermuda the “Windrush” is expected to occupy three weeks for the entire return journey.

Embarkation got underway around 3 o’clock in the afternoon, the military maintaining a rigid check both at the foot of the gangplank and onboard the vessel. Jamaican servicemen, who came home on leave were the first to be put on board and were followed by a draft of the Gloster Regiment. Next to go on were the deckers, and finally, cabin passengers in the evening.

The passengers embarked with just a few incidents handled so tactfully and quietly by the immigration officers that it did not delay the long going aboard procession.

A couple of the Jamaicans going to the U.K. in search of work lost their passports, another said he gave a relative his passport to hold because he was afraid it would be picked from his pocket. Immigration officers checked the long passenger list but the name George McDonald was nowhere to be found.

The disappointed Portlander said he was born at Hector’s River and was a member of the Royal Air Force. He came back home two years ago. A shoemaker by trade he thought he could do better in Britain than here and had planned to return.

McDonald said last night that there must have been a mistake somewhere. Outside the wharf premises, last night colleagues of the young Portlander sympathized with him.

Another Jamaican with ambition to reach Britain at any cost turned up with a passport which Immigration officers on the alert for “beaters” discovered was not his. He confessed that he purchased the troop deck ticket from his friend and that the passport was his friend’s.

So tight was the military ring that regulars on the waterfront declared that would-be stowaways would have a stiff time getting on board the “Windrush” – if they could at all.

“The best system can be beaten” chirped a waterfront habitué. Perhaps he knew what he was talking about.

Among cabin passengers on the vessel are Dr Ignatius Cruchley, accompanied by his wife. They will be away for about four and a half months, during which Dr Cruchley hopes to do a lot of travelling and see something of the Olympic Games.

Dr F. A. Aris, dental practitioner, going on a long-promised vacation and Mr Eustace Melbourne, city businessman and sportsman, going on business and pleasure and to be away for a few months, are also on the passenger list.