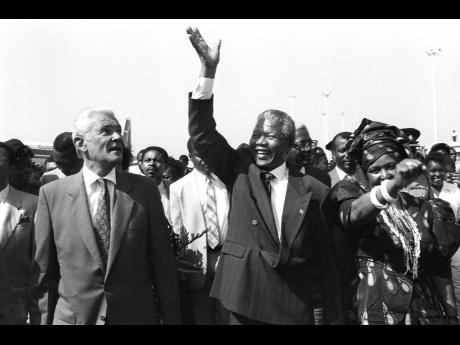 File
Nelson Mandela, President of the African National Congress of South Africa, waves in appreciation of the tumultuous welcome he received from Jamaicans in the waving gallery and on the tarmac at the Norman Manley Airport on July 24, 1991. Prime Minister Michael Manley, (left) escorted the ANC leader, while Winnie Mandela, right raises her clenched fist in the ANC salute to the crowd.

February 1990 marked the day then South African president Frederik Willem de Klerk announced the unconditional release of soon-to-be African National Congress leader, Nelson Mandela. But according to the man who was to become president of South Africa and lead the transition from Apartheid to democracy, being released from prison after 27 years was not the happiest day of his life.

"THIS is the happiest day of my life", African National Congress (ANC) President Nelson Mandela said on the evening of July 24, 1991, before tens of thousands of Jamaicans jammed into the National Stadium, at the climax of a hectic 24-hour visit.

Unrestrained outpouring of love and affection greeted the ANC President and his wife Winnie as they spent a hectic day in Jamaica where the streets of Kingston were filled with people hoping for a glimpse or touch of them.

"I can say from the bottom of my heart that this is the happiest day of my life," Mr Mandela said after receiving the Order of Jamaica (O.J.), the highest honour a non-national can receive. Throughout the day he heard praise heaped upon his efforts and those of his wife in the anti-apartheid struggle and received an honorary doctorate at the University of the West Indies, dined with six heads of government from the region and had the rare honour of addressing a session of the joint houses of Parliament.

"This warmth and demonstration we did not expect,” Mr Mandela said.

Mrs Mandela told a women's rally she had seen nothing like it before.

"Mandela", "Winnie", "Africa" were on the lips of people almost everywhere as the Mandelas plunged into a varied programme that had some officials struggling to keep up, and police scrambling over the capital city to restrain joyous and huge crowds.

Few people could remember any time when the country had been caught up in so much emotion or when the National Stadium had been so packed with hundreds outside the gates hours after they had got there. Comparisons were made with the visit of Emperor Haile Selassie 25 years ago in 1966.

Even the Parliament had a rare unity and consensus. A resolution was affirming continued support of Jamaica for the anti-apartheid movement and the continuation of sanctions. Prime Minister Michael Manley and Opposition Leader Edward Seaga mentioned and praised the bi-partisan support Jamaica had maintained against apartheid.

At the Wyndham Hotel, where the couple was whisked after their arrival, pandemonium broke out as many tried to shake the Mandelas’ hands or Just touch them “I touched her!” screamed Yvonne Johnson of Garveymeade. “I feel great, real great. I have never been that close to someone so good."

“I yanked somebody's hand and put mine in his," said a satisfied woman after she had shaken hands with Mr Mandela.

Tourists lined the corridors and stairways, their cameras ready to snap the occasion. As people on the outside came through the airport lobby, everyone was asking "did you get a touch?”

And amidst the Jubilation along the route from the airport to the Wyndham Hotel, adults held up children to catch a glance of the procession bearing the honoured couple.

A one-legged dreadlocked man was seen pedalling his way patiently along the way, glad to witness this part of history. Even the police were unable to stop the sometimes unruly expressions of love, as cyclists sped along the route, creating hazard, excitement and a great spectacle.

Not since the visit of Emperor Selassie, has the Rastafarian community in Jamaica had reason to gather in such numbers, to chant and give vent to their great and deep feelings for Mother Africa.