Minister weighs in on hairstyles debate 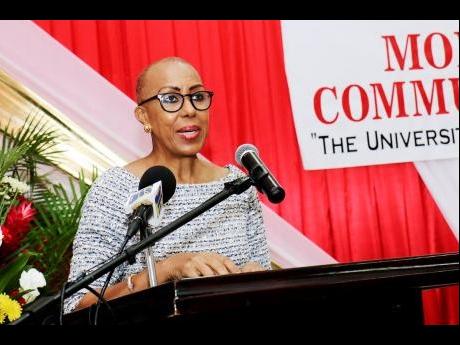 A quiet debate has been raging for the last two weeks regarding whether or not unnecessary colonial legacies have driven schools, in particular, to be unfairly critical of students decisions to wear certain hairstyles or whether or not those decisions fly in the face of discipline. Minister of Education, Fayval Williams, has weighed in on the issue.

WITH THE thorny issue of dress code and grooming policies in schools having come back into the spotlight in recent weeks, Education Minister Fayval Williams has reaffirmed that such guidelines should not be used to keep students from pursuing their studies.

“What we can say from the Ministry of Education is that education is a priority for our students, and we do not believe that students should be turned away from school because of some issue with deportment that needs to be dealt with at another point in time or in another way,” Williams told The Gleaner on Thursday following an award ceremony for 125 students at the Montego Bay Community College in St James, where she gave the keynote address.

Policies on students’ grooming returned to the spotlight earlier this month when the Westmoreland-based Manning’s School came under sharp criticism for correspondence denouncing the wearing of Afrocentric Bantu knots by its graduates.

At that time, Manning’s principal Steve Gordon said that the guideline was not discriminatory but was instead intended to reduce the level of difficulty students may have had in trying to fit mortarboards on flamboyant hairstyles. He maintained that the school was not biased against students of African descent or persons of any specific religious persuasion or ethnicity.

In the meantime, Williams noted that a new national policy on student deportment, which is being crafted by the Ministry of Culture, Gender, Entertainment, and Sport with input from the Ministry of Education, will soon be completed.

In 2018, the Ministry of Education published a grooming policy that gives schools latitude in determining hairstyle standards.

The ministry had previously sought to formulate a grooming policy for schools as far back as September 2016 when administrators of the St Andrew-based Hopefield Preparatory School came under fire for refusing admission to a three-year-old boy because of his hairstyle.

Several months before that, the administrators of Kingston College barred several students from its North Street campus because they were wearing mohawks and fade hairstyles.