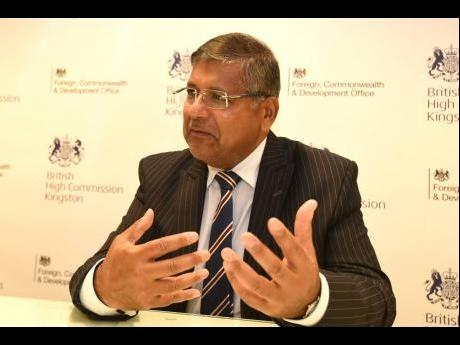 Kenyon Hemans/Photographer
British High Commissioner Asif Ahmad: “When we follow the money as we do ... it is striking still how often the trail leads to a politician on a council somewhere.”

The link between politics and crime in Jamaica has always been posited in hushed tones. But now, a senior United Kingdom official has admitted openly that many of the investigations coming out of that country into gun-running on Jamaican shores point to that very fact.

OUTSPOKEN UNITED Kingdom High Commissioner to Jamaica, Asif Ahmad, has indicated that local political figures are still linked to gunrunning and other illegal activities in Jamaica.

Ahmad, who is wrapping up his four-year tour of duty in Jamaica, told The Gleaner in a recent interview that when the UK and other countries investigate illicit firearm trafficking into Jamaica, local politicians sometimes turn up on their radar.

“When we run operations here with Customs, chasing firearms, or when we follow the money as we do - and our American colleagues have the same experience as well as Canada

- it is striking still how often the trail leads to a politician on a council somewhere,” Ahmad revealed.

Describing the situation as “sad”, the UK diplomat said that “I know that this is something that the prime minister is determined (to tackle) ... but I think it takes political leadership, not just from the PM and his team. The PNP and the JLP, they need to just drive this out of the ecosystem.”

Asked why the UK has not imposed tough sanctions on politicians linked to wrongdoing, Ahmad said that his country has taken steps to strengthen its resolve on sanctions.

He said that the UK foreign secretary had asked every mission for a “list of people that you think fall into this category because we are now determined to follow through ...”.

Ahmad told The Gleaner that the UK government is prepared to act when there is clear evidence of wrongdoing and in cases where the legal system has pursued these individuals and they are found to have breached the law.

However, the UK envoy said that action would not be taken against alleged wrongdoers who hold political office on the basis of hearsay evidence.

“What I don't want to do is to act on rumours and innuendoes because I have seen it here where politicians from one side basically throw mud at the other side and hope somehow it could stick. We saw it in the run-up to elections. If they can't win fairly, they come up with these things.”

Ahmad made it clear that the UK would take immediate action against political figures if they are found guilty in a court of law. Sanctions, he said, may include the revocation of visas.

“I would go as far as to say that in other cases where people have been in the limelight for suspected violence ... I have looked at that case and I actually said, 'Would we allow a person like this to come to the UK, and would that person be seen as somebody we would be comfortable with?' and people like that if they had UK visas, I would be looking seriously at revoking,” he told The Gleaner.

He argued that it was not just about the strictness of the law, “but if in the sight of clear evidence the system does not work, then we can make up our own minds”.

Ahmad confirmed that the statement could apply to lawmakers.

Describing as “huge” the efforts by the international community, including the UK, the United States, Canada, and the European Union, over the last decade, to tackle Jamaica's serious crime problem, the top British diplomat here said there had been little discernible change.

“If we had to do an honest assessment, much has not changed with Jamaica still being the world's capital for homicides. It's a very sad statistic to talk about,” the diplomat highlighted.

“Young kids that I have spoken to who live in the garrison areas who we are mentoring, you hear heartbreaking stories of their cousins, their brothers being shot – and some of the gang revenge is despicable in what actually happens – violence against women and children,” he bemoaned.

Jamaica is the fifth most murderous country in the world.

Ahmad reasoned that there was an underlying dysfunction in the society, noting that he had spoken to volunteers, church groups, and women who were trying to be peacemakers in communities.

“There is a huge amount of effort being made, but [it] is manifestly not working,” he said.

Ahmad urged the Government and the parliamentary Opposition to work together to implement with urgency the National Consensus on Crime recommendations that were signed in August 2020 by Prime Minister Andrew Holness and then Leader of the Opposition Dr Peter Phillips.

“If the politicians here tackled crime in the same way they tackled the IMF financial situation and took that story down to the community level, it would be a different story,” Ahmad argued.

He noted that a multidimensional approach should be taken in addressing Jamaica's crime problem, noting that “you cannot just do it with a hard edge – with the military and the police – you need social interventions”.

The high commissioner acknowledged that some measure of social intervention had been introduced but noted that the budget for those activities was inadequate.

Ahmad said he had suggested to National Security Minister Dr Horace Chang that troubled communities and individuals be treated as a case and caseworkers assigned.

“So if a child is in distress – it's education, it's health, it's the local community support, it's the funding that they need for clothes and tablets for their schooling, it's about making sure they have a phone number to call if they are in distress – it's a holistic approach that is needed,” he said.

The UK diplomat pondered how a country of Jamaica's size and population of three million could have such an intractable crime problem.

“It's not as though you are talking about more than a hundred million people on thousands of islands in the Philippines, where I come from, where there is a similar problem,” he said.