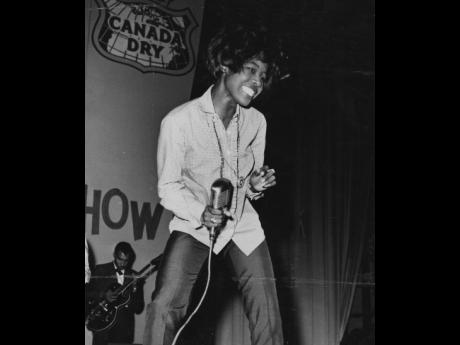 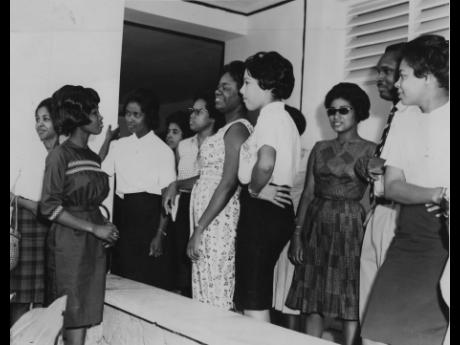 File
Jamaican singer Millie Small (left) meets admirers from the staff of the Prime Minister’s Office, the Ministry of Development and Welfare and the Ministry of Finance, when she visited the East Race Course buildings on July 30, 1964. 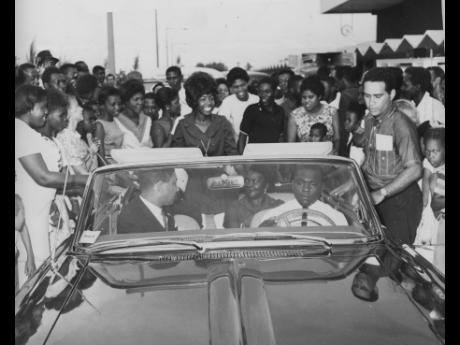 File
A smiling Millie Small (The Lollipop Girl) in the car in which she was driven from Palisadoes to the city with her mother and impresario Mr. Stephen Hill (left), on July 29, 1964.
1
2
3

At 16 years old, Millie Small was already a superstar. When she came home towards the end of July in 1964, having already published her biggest hit, ‘My Boy Lollipop’, Jamaicans all over made her aware of just how appreciated she was.

A LARGE CROWD gathered outside the Government offices at East Race Course on July 30, 1964, as word spread throughout the area that famous Millie Small, homo on a visit sponsored by Canada Dry, was due to see the Prime Minister.

From as early as 10 0’clock, fans had gathered for a glimpse of Jamaica’s "Lollipop Girl” who has made her name singing in England. When the car arrived with the "smiling I6-year-old, Millie had a difficult time getting through. She took it in good grace and stopped to talk to as many people as she could and to sign autographs for fans.

In response to many requests, she hummed a few bars from her three most popular hits, "My Boy Lollipop”, “Sweet William" and "Oh Henry."

The Prime Minister, the Rt. Hon. Sir Alexander Bustamante, had to be out of town at the last minute and was not able to keep the appointment. A message from the Prime Minister did not get to Millie in time and she didn’t know until she arrived. But Millie only shrugged her shoulders and philosophized. "He’s gone to my parish, anyhow.” Sir Alexander had gone to Clarendon.

The Minister of Development and Welfare, the Hon. Edward Seaga, who should have escorted the singer across to the Prime Minister’s Office entertained her instead. Plans for her stay in New York were discussed and the Minister promised to get in touch with promotional companies there.

The next stop was the Duke Street office of the Leader of the Opposition, Mr. N. W. Manley, Q.C. Although manager/guardian Chris Blackwell arrived a few minutes after 11.00, the singer and impresario Stephen Hill were nowhere to be seen. When they finally arrived, they reported that Millie had again been mobbed by autograph hunters and fans.

Mr. Manley was presented with three recordings of the hit tunes and promised Millie that on Monday morning he would try to be at her show, and amidst laughter, adding “and ska on stage with you.”

She also made a short stop at the offices of the Gleaner Co. Ltd, where she was greeted by the Managing Director Mr. S.G. Fletcher and the Editor Mr. Theodore Sealy.

Poised and self-assured, Millie was introduced to members of the staff, flashing her now-famous smile.

She wore a moss green sheath dress, with smocking (one of the latest fashion fads) at the bust and on the cuffs of the elbow-length sleeves; the bag which she carried had a shoulder strap, another fashion fad which is just catching on in New York and London.

Outside the offices, she was greeted by a cheering crowd, who had heard that Millie was in the vicinity.

She was due to have dinner with the Director of Tourism, Mr. John Pringle and Mrs. Pringle and she said, she was looking forward to getting some breadfruit.