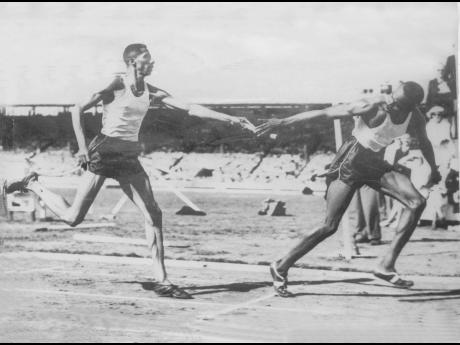 File
Herb McKenley passing the baton to George Rhoden in the famous relay at the Helsinki Olympic Games in July, 1952, in which the Jamaica team won in World and Olympic record time.

There are a great many moments and names that have added to Jamaica’s proud history at the Olympics but just shy of 50 years ago, there were four who performed such a feat, that their lives would never be the same again. Arthur Wint, Leslie Laing, Herbert McKenley and George Rhoden, on July 26, 1952 earned immortality.

JAMAICA followed up her victory in the 400-metre race by a brilliant triumph over the U.S. in the best 1600-metre relay ever run. Jamaica's team were: Arthur Wint, Leslie Laing, Herbert McKenley and George Rhoden whilst the United States Ollie Matson, Gene Cole, Charlie Moore and Mal Whitfield.

Wint and Matson ran their first leg of 46.8 with Gunther Steines of Germany one step behind

It was a two-team race although the German combination were running in spectacular fashion.

An incredible third leg of 45.1 seconds by McKenley closed in relentlessly on Moore, the 400m hurdles champion. Moore was timed in 46.4, superb on any other day and in any other place, but McKenley was magnificent in erasing the gap and touching off Rhoden a fraction of a second ahead of Whitfield.

They came around in the same position both being timed 45.2.

The record-shattering time by the Jamaican team was 3 minutes, 3.9 seconds, fully 4.3 seconds faster than the previous world and Olympic records established by the American team of Ivan Faqua, Edgar Ablowich, Karl Warner and William Carr at the Los Angeles Olympiad in 1932.

After their final triumph, the four Jamaicans hugged each other in the middle of the track and McKenley, their fastest member was presented with flowers.

Herb, who was the hero of this colossal effort, waived his gold medal gleefully.

The 70,000 spectators knew what this meant as at the London Olympiad in 1948 he was beaten into second place by Arthur Wint in the 400-metres and here at Helsinki he had already been placed second in two photo-finishes in the 100 and 400 metres.

The mammoth crowd, which included the Duke of Edinburgh, gave an extra cheer. Then as the four Jamaicans trotted around the track, the crowd rose and gave them another ovation.

Once more in three days, Jamaica had won and the little island had created sporting history.

Finland, the nation that is host at the Olympics, has been touched by the gesture made by the Jamaican team to their “grand old man”, Jean Sebelius, the composer. The team sent him a box of cigars with this message: “As a small token of our good wishes to you and these precious people of Finland.”