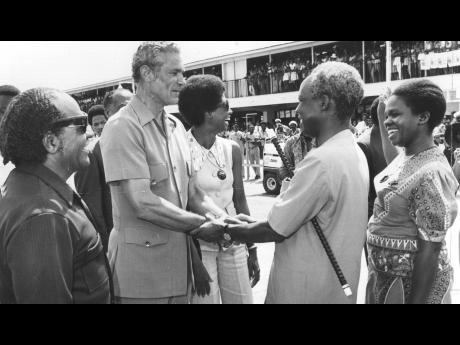 File
A FIRM AND WARM HANDSHAKE between Prime Minister Michael Manley and Tanzanian President Julius K. Nyerere as final farewells are made at Sangster International Airport in Montego Bay on September 18, 1974. At left is Senator Dudley Thompson and at right Madame Nyerere, with Mrs. Manley standing to left of her husband.

From early in his political career, son of Norman Washington Manley, and the fourth prime minister of Jamaica, Michael Manley, showed he had an aptitude for international affairs and further, a growing respect worldwide as a leader who would stand in solidarity, particularly for the black cause. In 1974, when he met with visiting president of Tanzania, Julius K. Nyerere, Manley provided just one example of his growing international stature.

A WIDE RANGE OF international and bilateral issues were discussed by the Prime Minister of Jamaica, the Hon. Michael Manley, and President Julius K. Nyerere of Tanzania, during their official meeting at Jamaica House over the President’s stay, which ended yesterday.

A joint communiqué issued in the name of both Governments yesterday, at the conclusion, of the visit, said that the two leaders examined the international situation, with special attention to the issues of colonialism and racism in South Africa.

Particularly, they hailed the Lusaka agreement between Frelimo and the Portuguese Government which has set a timetable for the transfer of power to the people of Mozambique, led by Frelimo and a date for the country’s independence.

They looked forward to early negotiations with the Portuguese Government leading to full independence for Angola and expressed the belief that the decolonization of the Portuguese territories would assist the liberation struggle in Zimbabwe and Namibia.

On the international economic situation, they reaffirmed the importance of a solid united front on the part of the developing countries to bring about an equitable international order. In this connection, they welcomed the solidarity displayed by the A.C.P countries in their recent negotiations in Kingston with the E.E.C countries.

Both leaders, their Ministers and Officials, exchanged views on ways and means of promoting bilateral ties between the two countries. Specific areas of concrete cooperation were identified, culminating in the signing of the agreement for technical and cultural cooperation.

At the end of his visit, President Nyerere and his delegation expressed “profound appreciation and gratitude” to the Government and people of Jamaica for “the warm and brotherly reception” recorded to them and for “the opportunity to see for themselves the progress and achievements made by the people of Jamaica”.

President Nyerere extended an invitation to the Prime Minister and Mrs Manley to visit Tanzania. Mr Manley accepted the invitation with pleasure, the communiqué said. The visit will take place on a date to be arranged “through normal diplomatic channels.

Giving an account of the visit, the communiqué reported that the Tanzanian delegation was accorded a very warm and fraternal welcome by the people and Government of Jamaica. It gave an account of the various activities carried out by the President during his four-day stay which began on Saturday.

Details of the talks between the two leaders, which were held at Jamaica House on Tuesday, were given in the communiqué as follows:

In examining the international situation, special attention was given to the issue of colonialism and racism in South Africa. They also reviewed the latest development in the Portuguese colonial territories and welcomed the admission of Guinea Bissau Nations and saw this admission as expressive of the victory of the armed struggle of the people of Guinea Bissau against Portuguese colonialism and national independence. They also looked forward to the early liberation of the Cape Verde Islands.

The two leaders hailed the Lusaka agreement between Frelimo and the Portuguese Government which has set a timetable for the transfer of power to the people of Mozambique led by Frelimo and a date for the country’s independence.

They pledged themselves to cooperate with other freedom-loving forces to do everything within their power to assist in the implementation of the agreement and in Mozambique’s case to render all possible assistance to Frelimo both in the period of transitional government and more particularly after independence in order to help the people of Mozambique to consolidate their newly won freedom.

They welcomed the readiness of the national liberation movements in Angola to form a united front and looked forward to early negotiations with the Portuguese government leading to the full independence of Angola.

The two leaders believed that the decolonization of the Portuguese territories would serve as a catalyst in the liberation struggle in Zimbabwe and Namibia. To this end, they pledge increased support for the liberation movements concerned.

Both governments reiterated total opposition to the anachronistic and evil system of apartheid in South Africa; renewed their call for the international isolation of South Africa and pledged their support for and solidarity with the people of South Africa in their struggle for human dignity and freedom.

In an assessment of the International economic situation, both sides expressed concern about the further deterioration of economic relations, especially in the area of trade between the developed and developing countries; they stressed the necessity for immediate correction of this situation which is fraught with dangerous consequences for international peace and security.

Within this framework, they reaffirmed the importance of a solid united front of the developing countries to bring about an equitable international economic order and in this context, they welcomed the solidarity displayed by the ACF countries in their recent negotiations at Kingston with the EEC countries. They called for further consolidation of this common position.

In the course of the visit, President Nyerere and Prime Minister Manley, Ministers and Officials of both countries exchanged views on ways and means of promoting bilateral ties between the two countries.

Specific areas of concrete cooperation were identified and culminated with the signing of an agreement for technical and cultural cooperation. It was also agreed that there shall be further exchanges of delegations to follow up the implementation of the agreement.