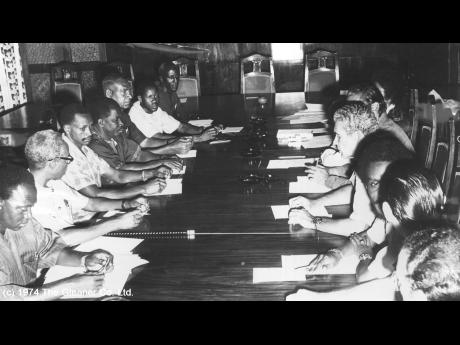 File
Government-to-Government talks between Tanzania and Jamaica took place on September 17, 1974 in Banquet Hall of Jamaica House. The Tanzanian on the left was headed by President Julius K. Nyerere (second from left) and the Jamaican team by Prime Minster Michael Manley (fourth from right). 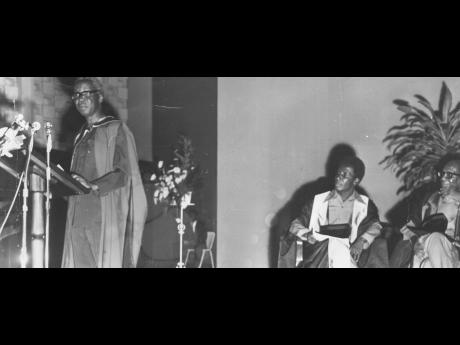 File
Dr. Julius Nyerere, the President of the United Republic of Tanzania, addressing the audience on socialism and self-reliance in Tanzania at the University of the West Indies on Monday September 16, 1974, after the honorary degree of Doctor of Letter was conferred on him by Mr. Aston Preston, the Vice Chancellor of the U.W.I. Public Orator, Mr. Rex Nettleford, who read the citation (centre) sat which other members of the academic community on the platform with Dr. Nyerere. 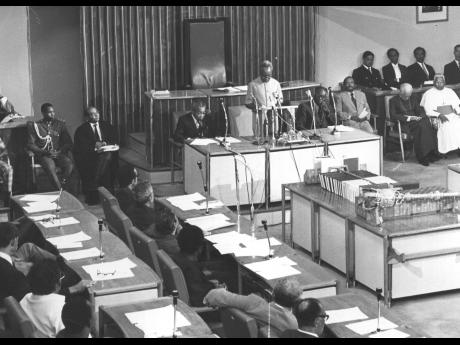 President Julius K. Nyerere of the United Republic of Tanzania, addressing a joint sitting of both Houses from a rostrum at the Clerk's Table. He is flanked by the President of the Senate, the Hon. A.G.R. Byfield (on his left), and Mr. Elon Wilson, Deputy Speaker. 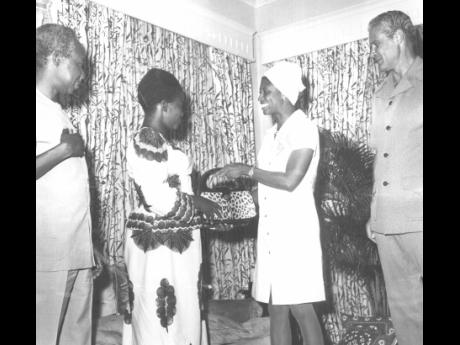 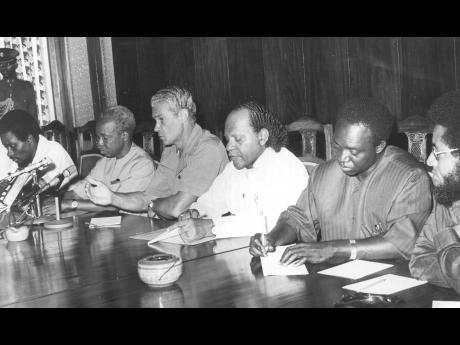 File
At Jamaica House; President Nyerere and Prime Minister Manley at their press conference at Jamaica House on September 17, 1974, immediately following the singing of the cultural agreement between Jamaica and Tanzania. From left are the Hon, P.J. Patterson, Minister of Industry Commerce and Tourism; President Nyerere, Prime Minister Manley, Senator Dudley Thompson, Minister of State in the Office of the Prime Minister; and the Hon. J.S. Malecela, Tanzania Minister for Foreign Affairs, Senator Thompson and Mr. Malecela singed the agreement for cultural and technological exchange their two countries.
1
2
3
4
5

Julius Kambarage Nyerere is most well known as a socialist and a major advocate of Pan-Africanism, philosophies that were near and dear to the heart of Jamaicans in the period from the late 1960s to about the middle of the ‘80s.  That union of thought made it a no-brainer that the long-serving ruler of what would eventually become known as Tanzania would have been a hit when he visited the island in 1974.