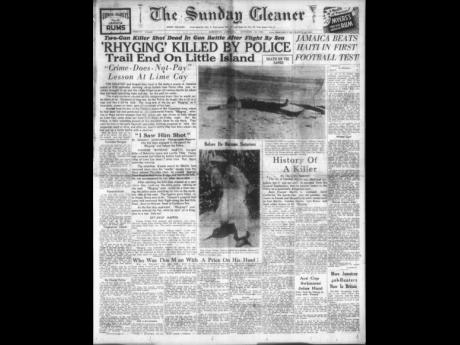 The Sunday Gleaner front page of October 10, 1948, showing Rhyging in life and in death.

After six weeks of terror, Jamaica's most wanted was gunned down by the police. Wanted for a triple murder,  Rhyging escaped the police at least three times before. He was, however, cornered and is said to have received multiple shots from the police. He was brought to the morgue, where detectives confirmed his identity.

THE GREATEST and longest manhunt in the modern annals of Jamaica ended at 8:00 yesterday morning when bullets from police rifles and revolvers brought to an end the crime-filled career of Ivanhoe Martin, for whom they had been searching night and day for the past six weeks,

The triple murderer carried out his vainglorious boast that he would not be taken alive. Cornered at long last by the police, he fought like a rat in a trap, and like a rat he died. The long arm of the law got 'Rhyging' as it invariably, sooner or later, gets all criminals of his type.

Hunted from his lair in the western slums of the Corporate Area, where he had been fed and protected by his underworld friends, Rhyging, after two or three narrow escapes from the police net, was driven to take refuge on Lime Cay, some miles from Port Royal, on Friday night. But the police, in their relentless pursuit of the murderer, knew he was there. They went for him in the early hours of yesterday morning  prepared to take the desperado dead or alive, and after an hour's battle they had him—dead—he had put up a futile battle with a revolver.

After the police had put an end to his career, the body of the wanted man was brought over to Kingston by the police.

News that the desperado had fallen to the police firing squad spread like wildfire throughout the city, and for close upon three hours before the dead body arrived at the morgue, thousands lined the route all the way from the waterfront, pass the mortuary buildings deep into Producers Road.

The compound itself was jammed pack with people from every walk of life, headed by detectives, plainclothes and uniformed constables, as well as a representative group of undertakers.

From the railway premises, a crowd of some two hundred men and women formed a sort of gallery to the scene from atop two railway eight cars which were attained across the way, surely by accident and not design.  But their every hope of seeing the dead body entering the gates from that point was completely frustrated when railway engines coupled both cars and shunted them away to another point.

It was just after 11:30 o’clock when the police siren, hooting in the distance, signalled the approach of the van bearing the dead body, and needless to say, pandemonium broke loose. The police were hard-pressed keeping the crowds away, but at the same time, it was quite evident that they themselves were as anxious to get even a fleeting glimpse of the man who had aroused the community and kept them in trembling fear from the night of Tuesday, August 31.

The body of the dead man, wrapped in a sack, was heaved from the van through the gate by four stalwart detectives, who had to shoulder their way through the surging mass of police and civilians alike.

While the dead body, riddled with bullets, lay on the slab, CID fingerprint men busily checked their impressions to conclusively prove his identity.  It was all a job of speed, and Detective Sergeant A.S. James and his staff soon gave the OK, that the police had their man.

As the body lay on the slab, one could count at least five bullet wounds in the head, together with a ghastly opening in the neck, which told the tale of the powerful 'Mark'. The rest of the body was also spattered with bullet holes, and a clearly identifying agency was the mark of an old sore on the dead man’s shoulder yet unhealed, which confirmed the police's claim on the night of the incident at the hotel, that the fugitive had been injured by their fire.

It was a difficult time for the keeper of the morgue, what with the huge crowds surging to and fro, but within a half-hour the situation was brought fully under control, the room cleared for the doctor to perform the post-mortem examination.

The two-gun killer was as elusive as he was dangerous.  For five long weeks, he defied one of the biggest manhunt ever organised by the local police.  From time to time on the trail of a hot tip, men from the CID and the police, armed to the teeth, raced from one place to another, but Rhyging was not here.

First of all, he escaped from the General Penitentiary through one of the windows, and for several months he stayed underground.  Then somebody talked and a trap was set.

On the night of October 31, the police had Rhyging cornered in the Carib Hotel on Regent Street, Hannah Town.  But with guns blazing, he blasted his way out, killing Corporal Edgar Lewis and injuring Detective H.E. Earle.

Then for vengeance on the man whom he believed had 'stooled' on him, he went to 257  Spanish Town Road.  Not finding his quarry – Eric Goldson, by name – he shot and injured Estella Brown and Iris Bailey, who were on the premises.

Leaving a trail of blood behind him and himself wounded, the desperado disappeared.

Two hundred pounds was the price put on his head, but without effect.  The whole resources of the police force were callled into action, and every tip was followed as a blanket of silence was thrown over the search.

Putting bits of information together, the following appeared to be the movements of the killer:

After leaving Spanish Town Road, Rhyging moved to the Cockburn Pen area.  There, aided and abetted by some Indians and his cronies, he kept low for a couple of weeks.  As things began to get hot for him, he shifted to Kingston for a short while, then he set up his headquarters in a cave at Five Miles along Spanish Town Road, north of the road at the foot of the hills.

Again he moved, this time to the bank of the Duhaney River, north of the railroad track. He then went lower down to the mouth of the river and operated between his hide-outs on the riverbank.

As if in defiance of his hunters, Rhyging from time to time made excursions to various places of entertainment.  He was believed to have visited the cinema, especially when cowboy pictures were being shown.  He was reportedly seen at cycle races and 'coney islands'.

At all time he had bodyguards; at least four of his aides with him.

On Thursday last, a cordon of police surrounded his hideout in the Ferry Pen area along the Spanish Town Road, but again was aided by the swampy lands.  But the end was in sight.  There was no let-up in the hunt; the police following his trail to Lime Cay, where he was killed after a desperate stand.