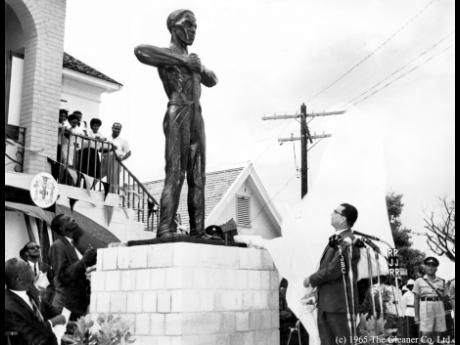 Acting Prime Minister Donald Sangster looking at the statue of Paul Bogle, erected in front of the Morant Bay Courthouse, which was unveiled on October 11, 1965, on the 100th anniversary of the Morant Bay uprising. 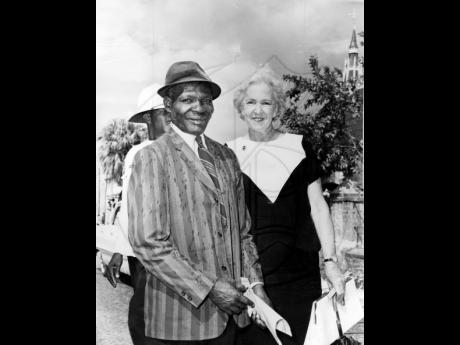 Mr Phillip Bogle, grandson of Paul Bogle, is seen here with Mrs Edna Manley, who created the statue of his ancestor, unveiled at the Morant Bay Courthouse on October 11, 1965. 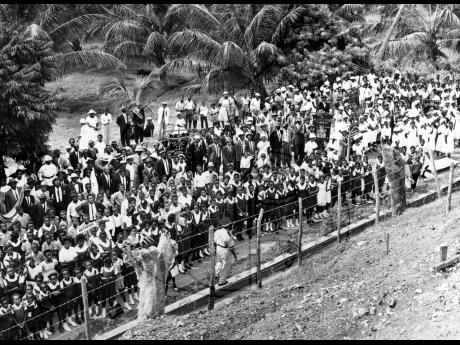 Schoolchildren and other marchers listening to the consecration service on October 11, 1965 at the shrine in memory of Paul Bogle and George William Gordon in the street below the high ground on which the monument stands, behind the Morant Bay Courthouse.
1
2
3

On October 11, 1965, there was a grand celebration in St Thomas. The country's leaders along with hundreds of Jamaicans gathered to pay respects to Baptist Deacon Paul Bogle. The Paul Bogle statue was also unveiled in front of the courthouse.

PEOPLE FROM all walks of life and from all parts of Jamaica, from the north coast, from the south coast, from the east and from the west, converged on Morant Bay yesterday morning to pay respects to the memory of Paul Bogle, Native Baptist Deacon, who led the historic march on the Morant Bay Courthouse, one hundred years ago.

The occasion was the consecration of the burial spot of hundreds of victims of the repressive measures employed by Governor John Eyre in retaliation for Bogle's March; and the unveiling of a symbolic statue of Jamaica's newest National Hero (executed by Edna Manley, leading sculptress) in front of the courthouse, which was the focal point in one of the most exciting and important chapters of this island's history.

All Morant Bay appeared to have taken a holiday and people came from Stony Gut, a name belonging to history, from Bath, from Hordley, from Stokes Hall and all the other various places where Bogle's men had played their indelible roles in Jamaica's history.

Heading the vast gathering were His Excellency the Governor General Sir Clifford Campbell, GCMG, and the Acting Prime Minister, the Hon Donald Sangster.

Present also were Mr Norman Manley, QC, Leader of the Opposition; Mrs Manley, Mr C.T. Barrett, chairman of the St Thomas Parish Council and soon to be new mayor of Morant Bay; Mr Keble Munn, MP, a descendant of the George William Gordon family, and a large number of other relatives of both Paul Bogle and George William Gordon.

Several announcements were made during the course of the ceremony:

The town of Morant Bay is to be raised to the status of a Borough and the chairman of the St Thomas Parish Council will henceforth be named Mayor of Morant Bay, to honour Bogle.

Simultaneously, the town of Lucea is to be raised in status and the chairman of the Hanover Parish Council will be known as Mayor of Lucea to recognise the fact that Hanover gave Sir Alexander Bustamante to Jamaica.

A scholarship known as the Paul Bogle Scholarship is to be established.

The government primary school at Morant Bay, now being extended, is to be renamed the Paul Bogle Primary School.

The new hospital now being constructed at Hordley to be named the Barrant Memorial Hospital, in honour of the memory of the late I.W.A. Barrant, the first member of the House of Representatives for Eastern St Thomas.

Outside on the fringes of the gathering, there was a placard demanding the renaming of the Princess Margaret Hospital, between Morant Bay and Port Morant, to the Paul Bogle Hospital.

There was an atmosphere of carnival in Morant Bay yesterday. Shops and other business places were mostly closed; so were the schools and everyone appeared to have descended on the Courthouse Square. In the immediate vicinity of the consecration of the burial spot and the unveiling of the statue there was an early scurry of rain. It was to come a little harder after the ceremony had closed. For the ceremony, however, the sky was clear but for scudding clouds, and the scene itself was bright under the occasional sun with the national colours everywhere and two stately royal palms eastward of the old Anglican Church swaying in a breeze blowing out of a sea, which was a painter's dream of blue and green and bristol glass.

There were women and men of all ages and in all manner of dress. There were children, some boy scouts, some boys brigade, some cubs, some girl guides, some brownies. There were uniformed men, and women of St Thomas social organisations, a kaleidoscope of colours, and they cheered the name BOGLE as if it were the most important name in Jamaica. A great cheer rose up out of the historic square as the acting prime minister unveiled the stark black statue to official public gaze.

There were speeches. There were speeches by Mr C.T. Barrett, chairman of the Parish Council, who also read a prepared speech for the Hon Robert Lightbourne, Minister of Trade and Industry (now in Geneva), himself a descendant of the Paul Bogle family; by the Hon Lynden Newland, Minister of Labour, now the MP for Eastern St Thomas; by the Hon Edward Seaga, whose Ministry of Development and Welfare was responsible for the entire ceremony, and by the Acting Prime Minister, the Hon Donald Sangster.

Mr Sangster said: "However much we rejoice today, let the facts of 100 years ago be a lesson to us and guidance. We today in Jamaica, because we believe in our way of life, because we adhere to the rule of law, are satisfied that we can achieve this same height, the same objectives that we desire by constitutional means.

"For instance, 100 years ago when the courthouse was destroyed there might have been a thought in somebody's mind that there would never be a courthouse here again. But today there is a courthouse, on this same spot, the place where every one of us can go and receive equal consideration in the eyes of the law. So when we rejoice, let us take it as a lesson and let us rededicate ourselves each one of us to work for our country's progress in whatever way we can."

And there were complaints. Mr R.O. Gordon, himself a descendant of George William Gordon (he descended from the family of Gordon's brother) was loud in his complaint that members of Bogle's and Gordon's families were not formally introduced to the crowd or allowed to speak. Mr R.O. Gordon is a politician of long-standing in St Thomas. He is also a farmer. There were other complaints. People generally wondered why at this, a national occasion, there was no speech from the Leader of the Opposition, Mr Manley. It was a widespread complaint.

And there were other ceremonials as St Thomas marked Bogle's Day. Earlier yesterday morning, at 7.30 o'clock to be precise, hundreds and hundreds of people had made a pilgrimage to Stony Gut, where a short divine service was held near the site of Bogle's Chapel. Later yesterday morning they returned to Morant Bay from Stony Gut in symbolic re-enaction of Bogle's March from Stony Gut, yesterday, 100 years. And at Church Corner they debouched from buses and trucks and marched the route that Bogle took to the courthouse. Heading them was the Hon L.G. Newland and members of the Parish Council which has replaced the Vestry of Bogle's Day.

Later, between snow-cones and dancing and singing there was an Agricultural Fair at Lyssons was (opened by the Governor General) and an exhibition of articles of the period, photographs and models of Morant Bay buildings of the time (opened by the Minister of Development and Welfare).

And tributes were paid: To Mrs Manley for her work on Bogle's statue; to Sir Alexander Bustamante, ailing prime minister of Jamaica; to Mr Norman Manley, the Leader of the Opposition (present-day heroes, Mr Sangster termed them), and to the hundreds of people throughout the island, social workers, teachers, clergymen, politicians who had contributed to the island's accomplishments, and to the families of those who had suffered in the aftermath of Bogle's march on the Morant Bay Courthouse.

Mr Sangster said in his speech: “My heart goes out not only to Gordon and Bogle and to the others who lost their lives, but to the families who at that time were left. We will never know how many little children there were who lost a father or both parents. We will never be able to measure or estimate the tremendous impact it must have had on those families, the loss it must have been to them ...”

And that was how, yesterday, Paul Bogle's Day was commemorated in historic Morant Bay.