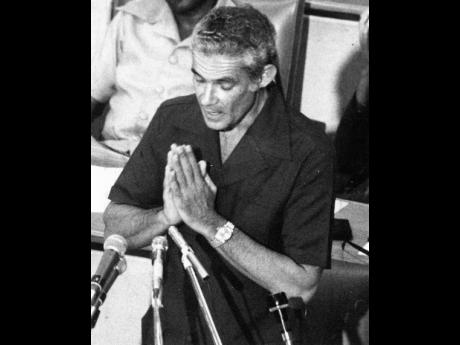 PM Manley delivered a three-and-a-half-hour speech to the House, where he announced a new minimum wage package as well as a compulsory savings scheme estimated to collect some $50 million to be put in a National Housing Trust.

– Policy of pause-yet-expand for all sectors of the economy

A NATIONAL MINIMUM Wage of $20 per week or 50 cents per hour for a 40-hour workweek was announced yesterday by Prime Minister Michael Manley as he presented Phase Two of the Government's anti-inflation package to Parliament and the nation.

Highlighting the package was the announcement of a compulsory savings scheme estimated to collect $50 million in the first year to put into a National Housing Trust, which will operate as a financial institution for the housing sector.

In a statement lasting three and a half hours, the prime minister made these other major announcements:

Rents in depressed areas are to be rolled back to January 1971 levels; and people's community tribunals will be established to determine official levels of rent. '

Stricter price controls will be implemented to be monitored by a reorganised Prices Commission, which will also be the machinery to monitor guidelines on pay.

The Budget is to be cut back to a ceiling of $919.5 million involving a reduction in government expenditure of $36 million.

Mr Manley also announced that professional groups have agreed to freeze their fees at present levels for 12 months.

Production geared to national priorities to feed, house and clothe the nation is set as the key to the package, getting financial incentives, to boost the use of local raw materials and production for export.

Government food farms are being expanded and there will be a change from daily paid to task rate to increase productivity. Food production will also be started on 1,200 acres close to the Corporate Area and on 1,000 acres within the city.

Guidelines for profits provide for the monetary margin per-turn of turnover, sales or output to be held constant at the average of the past three years.

Guidelines for dividends stipulate that, for companies, dividends before tax shall not exceed 7% of net worth for a one-year period beginning October 8, 1975.

Wage guidelines have been established for an interim six-month period as no final long-term agreement was reached between the unions, employers and the government during the September consultations.

In announcing the National Minimum Wage effective from November 1, the prime minister made clear that it did not apply to persons working in approved or recognised voluntary agencies who do not receive government support; to apprentices working under the Apprenticeship Law: or to young people working during school vacations.

In the case of household, the prime minister said that if the parties agree to make a daily contract of employment, it will be for eight hours at 50 cents an hour with overtime, at time-and-half applying after eight hours.

With a weekly contract of employment, the parties will be free to distribute the agreed hours in any way they wish, the contract not being less than 40 hours and not more than 44 hours.

The prime minister stressed that no employer may reduce the daily or weekly rates which they now pay, in the event they pay more than the minimum.

To meet cases of hardship, the Government has agreed to offset the increase in costs to certain householders with a tax allowance of $520 per year, the relief being limited to persons earning up to $10,000 a year.

Collection will be made through the NIS machinery, but funds will be kept independent of both the NIS and the Consolidated Fund. The new fund will be managed by a board comprising representatives of Government, employers, trade unions and other members of the public, with a majority of worker representatives.

Workers will be able to obtain houses on loans at special rates and to repay mortgages as a percentage of their incentives.  Persons who do not receive a house, or who already own a house, will receive a rate of interest on their savings instruments.

After seven years of contributions, a worker will be entitled to ask for and receive the amount paid during this period, provided that he or she has not received benefit by way of a house during this time.  In the case of employers, the instrument is redeemable after 25 years.

A mortgage up to a predetermined maximum will be made available to individual contributors on the basis of stratified, random sampling.

In dealing with wage guidelines, the prime minister directed a special appeal to trade unions and employers to be mindful of their relative deprivation of lower-paid workers.  He said Jamaica could no longer contain the high levels of inflation-inspired increases of recent times.

In the six-month interim period, there will be further discussions on guidelines.  But with respect to all agreements expiring after September 1, the following guidelines apply: for workers earning up to $7,000 per annum, the purchasing power of their wages will be restored to the level ruling at the end of the contract that expired immediately prior to June 30, 1973.

This will be done by an adjustment to the wage equal to the difference between the actual increases received and the movement in the Customer Price Index.

The worker will be adequately compensated for any deterioration in the purchasing power of his wage during the six-month period on the same bases as the first adjustment.

Workers earning more than $7,000 and up to $12,000 per annum will be eligible for an increase no greater than the highest individual money increase earned by the group under $7,000.

Those between $12,000 and $16,000 will be eligible for an increase equivalent to no greater than half that of the highest individual increase earned by the group under $7000.

For those over $16,000, salaries and other emoluments will be frozen.

The guidelines for the Public Service stipulate that only teachers, nurses, professional and scientific staff with salaries of $11,000 and over will get increases in 1976 to complete the present cycle of revisions; but no further revisions of the group already dealt with will be undertaken, certainly not in the year 1976/77, Mr Manley said.

The People Community Tribunals to be constituted in each depressed area for assessing rents will have local JPs as chairmen, assisted by Rent Board officers. In other areas, the normal procedures of Rent Assessment Boards, as currently established, will apply.