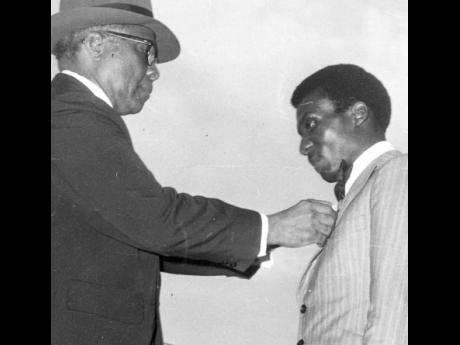 International artiste Jimmy Cliff received the Order of Distinction in a ceremony at the National Stadium on Heroes Day. The singer, whose given name is James Chambers, was recognised for his significant contribution to Jamaican music and by extension, Jamaica's culture.

For services in entertainment: Cliff gets O.D. award

James Chambers (Jimmy Cliff) was presented with the Order of Distinction (Officer) for services in the field of entertainment at the National Stadium on Heroes Day.

Mr Chambers was born in Somerton, St James, in the year 1947 and started singing with 4-H Clubs at the age of nine. In 1959, he came to Kingston and attended Kingston Technical School where he studied radio and television.

He had his first singing break with the Vere Johns Opportunity Hour at the Palace Theatre, and he performed on many occasions with the Byron Lee Band. In 1965, he went to the United Kingdom and his singing career gathered momentum.

He has had several hits in many of the big cities of the world, notably Italy, Brazil and Denmark. The Harder They Come provided him with his first film role and in addition to writing the title song, he was also responsible for most of the music in the film.

Mr Cliff’s outstanding success in his career is due not only to his undoubted talent, but also to the high degree of his professionalism which characterises all his performances.