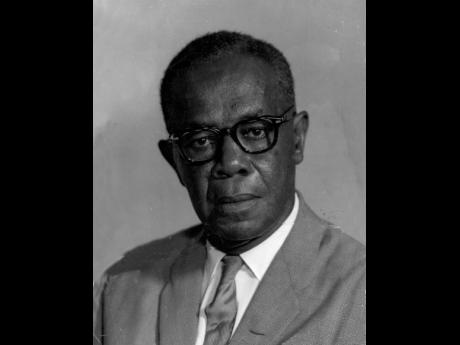 December 1 marks the day when Senator Clifford Campbell becomes the first Jamaican head of state. The very brief announcement was made simultaneously in London and Kingston.

Senator Campbell to be governor-general

First Jamaican to be made head of state

SENATOR, the Hon. Clifford Clarence Campbell, president of the Senate, is to be the next governor-general of Jamaica. The announcement made simultaneously in London and Kingston, yesterday, marks the first time that a Jamaican has been appointed to the high office of head of State of his country.

The brief but historic announcement reads: "It is announced from Buckingham Palace that the Queen, on the recommendation of the Prime Minister of Jamaica, has been graciously pleased to approve the appointment of Senator the Honourable C. C. Campbell as Governor-General of Jamaica in succession to Sir Kenneth Blackburne."

The retiring governor-general, who assumed office when Jamaica became independent on August 6 after being governor for nearly five years, goes on pre-retirement leave on November 30.

Although Sir Kenneth's leave is scheduled to last three months and eight days, it was stated at King's House yesterday that Senator Campbell will assume office on December 1.

News of Senator Campbell's appointment as the next governor-general did not come as a surprise. His name had led the list of persons about whom there was informed speculation when it was announced that Sir Kenneth Blackburne would become governor-general on independence and would carry on for only a few months after that.

Reports that Senator Campbell would succeed Sir Kenneth were intensified when the Prime Minister, the Hon Sir Alexander Bustamante, told Dr M. I. Okpara, visiting Premier of Eastern Nigeria, that "a coloured man" would be the next Governor-General.

The appointment follows the pattern set in the Federation of Nigeria where Dr Nnamdi Azikiwe was appointed President of the Senate in 1959 and became the first native Governor-General the following year.

Senator Campbell is at present in Nigeria as a member of the Jamaica delegation to the Commonwealth Parliamentary Association conference.

Clifford Clarence Campbell was born in Petersfield, Westmoreland, on June 28, 1892. He is the son of the late James Camp, civil servant, and his wife Blanche, daughter of John Ruddock, agriculturist.

Mr Campbell was elected member for Westmoreland Western in the House of Representatives in the first general election of 1944, having fought the election as a member of the Jamaica Labour Party. He beat his opponent by 8,500 votes in a poll of 15,000. He was made chairman of the House Committee on Education, and in the following year, was elected first vice-president of the Elected Members Association. Mr Campbell sat, meanwhile, as an ex-officio member of the Westmoreland Parish Council.

In 1948, he was re-elected to the House with a majority of 6,800 votes in a poll of 18,000. The following year he was elected the fourth Speaker of the House of Representatives, in succession to Mr O. A. Malcolm, whose seat in the House was declared vacant following a court hearing. Shortly after being elected Speaker, Mr Campbell visited the United Kingdom on the invitation of the British Government to attend the opening of the new House of Commons, which had been built to replace the chamber destroyed during the war. Mrs Campbell accompanied him on the trip.

Mr Campbell's election fortunes changed in 1955 when he lost his seat in the general election that saw the first triumph of the People's National Party over the Jamaica Labour Party. He was beaten by 2,079 in a poll of 20,000, and he lost again in 1959, but by the narrow margin of 785 votes in a poll of 13,400.

Mr Campbell was married in 1920. He is an Anglican.

His hobbies, as listed in Who's Who Jamaica, are agricultural pursuits, reading, music and painting.