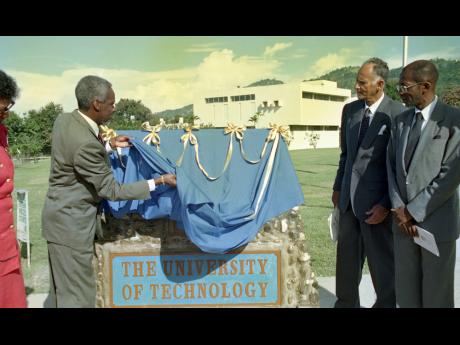 It was a historic moment on November 23, 1995, when Prime Minister P.J. Patterson (centre); chairman of the Council of the University of Technology, Dr Blossom O’Meally-Nelson (left) and president of the University. The ceremony and for the unveiling took place on the grounds of the institution at Papine, St. Andrew

The College of Arts Science and Technology (CAST) has been renamed. Prime Minister Patterson says there will now be a greater focus on science and technology in an effort to improve and build the respective industries.

THE newly named University of Technology, formerly the College of Arts Science and Technology (CAST), is expected to play an important role in the implementation of the new industrial policy, which is the blueprint for national growth over the next decade.

This was disclosed yesterday by Prime Minister P.J. Patterson while speaking at a ceremony renaming CAST.

Mr Patterson said that the highest possible priority was being given to the application of science and technology to improve existing industries, create new ones and open fresh opportunities for private-sector entities interested in using the results of relevant research.

He said the University of Technology was a good example of a government-created institution that established deep links and strong partnerships with the private sector.

According to the prime minister, there was a need to double in the shortest possible time, output at the tertiary level if the country was to create and sustain economic turnaround through effective production and high productivity.

He said his administration was resolved to continue the pursuit of policies that would enable the country to improve the quality of education at every level of the system and increase the access of young people to that ’quality experience’.

Mr Patterson restated his administration’s support for the recommendations to reclassify the teaching profession, despite its estimated cost of $1.4 billion. He said this was necessary to give teachers a reasonable opportunity to make the contribution to national development which they were capable of making.