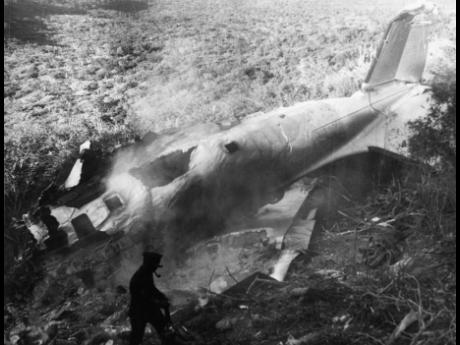 The tail section remains as the fires die away in the crash of the Colombian aircraft on November 26, 1962. In left foreground, a fireman moves a piece of equipment in the scorched area where the two crew members were burned beyond recognition. 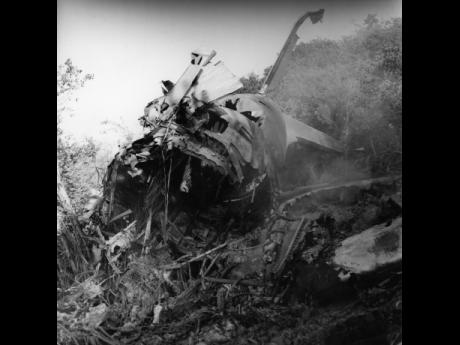 The charred tail section of the C-46 Urraca Airlines (Colombia) cargo plane that crashed and burned on a hill near Port Henderson, shortly before 4:00 a.m. The pilot and co-pilot perished in the disaster.
1
2

The Colombian aircraft had mechanical problems that were addressed upon its arrival in Kingston. There were further problems that prevented it from leaving at the scheduled time. After several hours, the plane left for Colombia but flew just for a few minutes before it crashed, killing the pilot and co-pilot.

TWO MEN were killed and a woman badly injured when a Colombian cargo plane crashed yesterday morning on a hill at Port Henderson. It was the first crash from the new Palisadoes runway.

The twin-engined C-46 aircraft, owned by Urraca Villavicencio Airlines of Bogota, Colombia, crashed on the northern side of a small plateau, a few hundred yards east of Rodney's Look-out, rolled over the cliff on the southern side, and burned.

The crash occurred about 3:50 a.m., just three minutes after the plane had taken off from the Palisadoes Airport on what was to have been a non-stop flight to Colombia.

The bodies of the pilot, Capt. Fernado Henao Jaramillo, and his co-pilot, Efrain Montano, were trapped beneath two engines and charred beyond recognition.

The other occupant of the Curtiss Commando plane, Miss Linda Millis, who like the others is from Bogota, was thrown clear on the top of the 700-foot hill, when found by Sgt. A. T. Golding of the Police Training School, a member of the rescue party. She was in a seat but the seat belt was not fastened.

Miss Millis was taken by a helicopter from H.M.S. Vidal to the Spanish Town square, and by ambulance to the hospital. She suffered cuts about the face and underwent an operation yesterday afternoon after X-ray photographs had been taken to determine possible internal injury. Hospital authorities yesterday evening said that her condition was fair.

The Vidal helicopter could not land on the uneven ground but used a sling to remove Miss Millis from the crash area. It also landed a navy doctor in case there were other survivors.

The plane arrived at Palisadoes from Miami on Sunday morning at about 11:30. The Gleaner understands that when it reached the ramp, members of the airport staff saw fuel flowing from one of its wings. Airport Fire Brigade units hurried out but nothing happened.

It is believed that the crew worked on the aircraft, and it was refuelled. About 1:00 p.m. Sunday, it taxied down the runway but returned to the ramp a few minutes later. It finally left for Colombia after 3:00 a.m yesterday, having taken on 755 gallons of fuel, in addition to what it already had.

The cargo included four aircraft engines, each weighing 4,000 lb., consigned to Bogota. The cargo capacity of the plane was not known.

People at a dance that was in progress at Port Henderson Just before the crash said they saw the plane flying unusually low. Shortly afterwards they heard the crash and saw flames in the hills A fisherman of the area said he was leaving his home to go to sea when he heard the plane and looked up. He saw it burst into flames and there was an explosion as it crashed.

A Gleaner survey of the crash area showed that a large section of the plane, which may have been a wing with the fuel supply, was left burning near the point of impact on the northern side of the hill, and was still smouldering five hours after the crash. Some trees were felled and others scorched as the plane swept across the top of the hill. It plunged down the southern side and came to rest about 300 yards or more from the first fire. Here the greater part of the plane burned, with its pilot and co-pilot trapped beneath the engines.

The aluminium of the front of the fuselage was melted by the inferno, and what was left of the body of the plane shrivelled in the heat and fell apart in some places.

Scattered over more than an acre were grim reminders of the violence of the impact, in the form of twisted and torn bits of metal, electronic apparatus, clothing, crockery, toys and other articles of the cargo. The police took charge of some items, and people from the neighbourhood said that a considerable amount of dollar currency had been found.

Detachments from the Spanish Town police, who are investigated the accident, and soldiers with Land Rovers and portable radio equipment, hurried to the scene in case they could render any assistance.

After the situation was known and the lone survivor was rescued, the military withdrew and left the rest to the police. Early on the scene was the Director of Civil Aviation, Mr E. T. Hanley, whose department is making a preliminary investigation into the crash.

The CAD also notified officials of the Colombian Government, and the names of the dead were withheld pending notification of next of kin.

A representative of Urraca Airlines from Miami, where there are offices, was expected to arrive yesterday evening in connection with the investigations. An official of the Colombian aviation authority was also expected.

The Colombian consul in Jamaica, Sr. Hernando Arango, said yesterday he had cabled his Government to inform them of the crash, and had personally visited the spot. He added that he was now in possession of the passports of the three occupants of the plane.

Until late yesterday the bodies of the pilot and co-pilot had not been removed from the wreckage, according to the Spanish Town police, who are continuing investigations under the supervision of Deputy Supt. J. E. James.