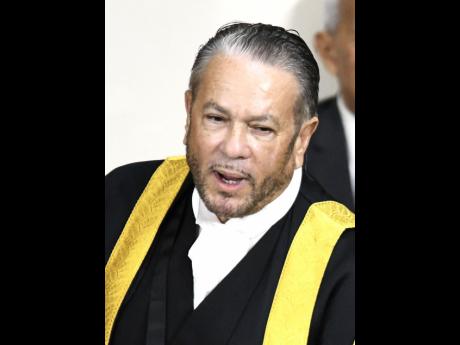 The president of the Senate, Tom Tavares-Finson, is supposed to be fair and calculated in his utterances. This was quite the opposite of what took place as the matter of the states of emergency was debated last Thursday. There is a time and place and a manner to address the Constitution and other matters and it is unfortunate that Mr Tavares-Finson chose to handle it the way he did.

UNTIL NOW, this newspaper has not felt it necessary to raise concerns about how Tom Tavares-Finson has conducted the affairs of Jamaica’s Senate as its president. Last Thursday, in a tirade against opposition members for failing to support the extension of the states of public emergency (SOEs), Mr Tavares-Finson crossed the line between his right to comment on matters being debated in the chamber and his obligation to operate not only with absolute fairness, but the perception thereof.

It would not be surprising if, in the aftermath of Mr Tavares-Finson’s display, opposition members of the Upper House, and the public at large, were to question the president’s commitment to the philosophies and values of Westminster-style liberal democracy, and his responsibility, from his seat, to protect the rights of the minority, even when their positions are in stark contrast with those of the majority, including the president’s.

What was particularly sad about Mr Tavares-Finson’s behaviour was that his plunge over the cliff was with his eyes wide open, with at least one calmer head apparently warning of the folly of the leap. “So, the clerk (of Parliament) is looking at me and telling me perhaps not to say it, ”he acknowledged at one point in the rant. “But let me tell you something, this country needs to reverse the provision because it flies in the face of everything that is sensible … .”

Mr Tavares-Finson’s reference was to the constitutional requirement that at least two-thirds of the members of the House of Representatives and the Senate support a resolution for a state of public emergency to continue after its declaration for an initial two weeks. That provision was inserted in 2011 as part of a raft of amendments to the Constitution. Prior to that, states of emergency could be extended with the majority vote of all the members of the legislature.

It is unfortunate that Mr Tavares-Finson chose to offer his proposal in the manner that he did, potentially doing damage to his reputation as the chief arbiter of the Senate. He would have likely gained greater traction and had more influence by opting for a calmer and cerebral-minded approach, rather than appearing to be a peevish partisan, ready to muck around with the Constitution because, this time, he did not have his way. He might also have had the context of Prime Minister Andrew Holness’ promise of a major review of Jamaica’s Constitution next year.

The background to this matter was t he Government’s declaration last month of states of emergency in three parishes (St James, Hanover and Westmoreland) and four police divisions in Kingston and St Andrew, reviving what has emerged as being its key strategy for confronting Jamaica’s problem of criminality, especially murders.

Last week, the Government sought to extend the measures. In the event, the House, where the Government’s 48 members of parliament (MPs) represent 76 per cent of the members, the resolution passed handily. Only two opposition members stayed until the end of the debate and voted against the motion.

In the Senate, at least one of the eight opposition members needed to vote with the 13 government members to achieve the needed two-thirds majority. None of the three who waited for the vote supported the administration – a fact over which Mr Tavares-Finson made heavy weather in remarks ahead of adjourning the sessions.

The Opposition People’s National Party (PNP) argued that most of what can be done under states of public emergency, except for detaining for long periods without due process, could be done with other laws, without the threat to constitutionally protected rights and freedoms.

Conceivably, if the Opposition does not support the extension of a state of emergency, a government could achieve its end by every fortnight declaring a new one, in the same area, citing the same set of circumstances. Obviously, Jamaica’s voters will decide whether the PNP, which took a bad drubbing in last year’s election, acted in bad faith and should pay a political price for its decision on the states of emergency.

But Mr Tavares-Finson complained that in the House only two opposition votes were against the measures. He repeatedly emphasised that in the Senate, “three unelected members – three – not even the eight of them – have put the security of the country on a knife’s edge”.

Added Mr Tavares-Finson: “No account has been taken of the elected representatives of St James, Hanover and Westmoreland, all of whom supported the state of emergency. Where is that an expression of democracy?”

He argued that the provision requiring a twothirds support for SOEs was put in the Constitution at the insistence of former Jamaica Labour Party leader Edward Seaga “because of the illegal (and) corrupt 1976 state of emergency” imposed by a PNP administration headed by the late Michael Manley. He urged church, private-sector and civil society leaders, and “every sensible Jamaican ... to look at what is happening here today and listen to what I am saying: two members of parliament ... two, and three unelected members of this Senate have put this country in grave danger”.

Obviously, both sides of the political divide, at this stage in Jamaica’s development, have different philosophical perspectives on how, and under what circumstances, states of public emergency ought to be used. The president of the Senate, like the Speaker of the House, might disagree with one or the other side. But to ensure healthy debate and good order of the legislature, and to preserve the tenets of the Westminster-style parliamentary democracy, it is important that the presiding officer respects all views.

Mr Tavares-Finson is no ordinary member of the Senate. As he remarked before getting into the substance of his rant, his presidency makes him a person “in whom a degree of responsibility has been vested”. He can voice his views, but from his vaunted position, tone and substance matter. He should not leave the sense that he is down in the trenches snarling and scratching with the rest of them. Which is what Mr Tavares-Finson did.