No sympathy for investors in Sterling Bank and Trust 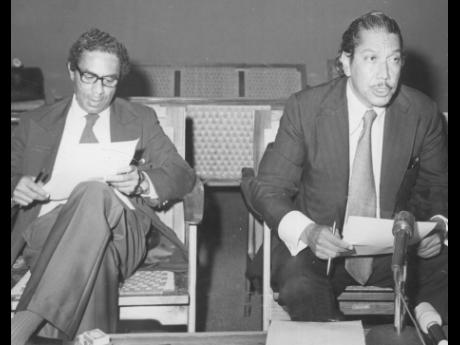 Deputy Prime Minister and Minister of Finance, the Hon David Coore (right), speaking at a press conference concerning breaches of the Exchange Control Law at Norman Manley Airport on September 23, 1974. With him is the Hon G. Arthur Brown, governor of the Bank of Jamaica. They left afterwards for a finance meeting in Canada and the United States.

The minister of finance used a press conference to send a strong message to persons who have foreign assets to declare. He also shared that he had no sympathy for those who would have invested in the failed Sterling Bank and Trust Company Limited.

Government warns on ‘full weight of the law’

PERSONS WHO COMMIT breaches of the Exchange Control Law “can expect to feel the full weight of the law”, the Minister of Finance, the Hon David Coore, said yesterday.

Announcing a final extension – to October 31 – for declaration by Jamaicans of all assets held abroad, Mr Coore said: “Those who do not take advantage of this final extension can expect to feel the full weight of the law.”

Coore added: “It could be just too bad for whoever it is who gets in trouble.”

October 31, he emphasised, was the final date by which all the requirements of the Exchange Control Law must be met. The date had already been extended on two occasions.

“October 31 is definitely and emphatically the last such extension that will be granted to persons still in breach of the provisions of the law,” he declared.

Coore spoke at Norman Manley Airport before his departure for North America to represent Jamaica at the international monetary talks in Canada and the United States.

Answering questions by reporters, Coore said he was not in a position to say exactly how much was held abroad, “but I can assure you that it runs into many, many millions of dollars".

He added for emphasis that the “amnesty” did not apply to persons who have committed criminal offences in connection with currency matters, such as forgery, bribery and criminal conspiracies of one kind and another, which were subject to legal action.

It applied only to failure to declare and repatriate assets.

Asked to comment on the failure of the Sterling Bank and Trust Company Limited of the Interbank group in Grand Cayman, Coore said: “I do not have any direct information about it. We are only interested in it peripherally.

“There are no legitimate Jamaican investments in the bank as far as I am aware. If there are Jamaicans who have invested in the bank, they have not done so legitimately, so we cannot extend much sympathy to them.”

Coore issued the following statement concerning breaches of the Exchange Control Law: “As a result of investigations made by the Bank of Jamaica relating to the movements in and out of Jamaica of foreign exchange, substantial information has come to my attention which indicates that there are several persons who are still in breach of the provisions of the Exchange Control Law 1954.

"The law requires that all person resident in Jamaica, for purposes of the Exchange Control Law, who hold assets of any kind outside of Jamaica, must make:

(i) a full and complete declaration of all such assets to the Bank of Jamaica:

(ii) where permission was not granted, full repatriation of such assets.

“The Government has decided to extend the date by which all the requirements of the Exchange Control Law must be met to the 31st October 1974. The full penalties under the law will be exacted against any person who fails to meet the requirements by that date.

“I would remind the public that all assets must be declared, including any of the following: